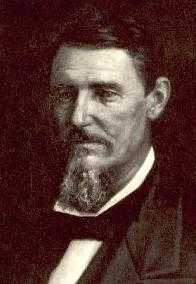 Throckmorton was born in 1825 in Sparta, Tennessee and came to Texas with his family when he was about 16 when they settled near Melissa in North Texas.  His father Dr. William Throckmorton is the namesake of the town and county of Throckmorton.  James studied medicine with an uncle in Kentucky before returning to Texas in 1847 to fight in the Mexican-American War.  Throckmorton suffered from chronic kidney disfunction, so he only remained active for a few months.  He then married, settled near McKinney in Collin County and opened up a medical practice.  In the years that followed, he studied law as he also became more active in the community.  Eventually, he left the practice of medicine and devoted his time to politics and the law.  He successfully ran for the Texas House of Representatives in 1851 and served three terms.  He then ran for the Texas Senate where he served from 1857 to 1861 until the outset of the Civil War.

He was aligned with Sam Houston as an anti-successionist and worked as an advisor to Houston as the he tried unsuccessfully to counter the successionist sentiment that dominated the state, culminating in a losing effort in the 1861 Texas Succession Convention.  Only about 7 or 8 votes were for remaining in the union with about 167 for succession.  The popular vote was not as one-sided, as by a vote of 44,317 to 13,020,  and Texans ratified secession on February 23, 1861.  There had been widely divergent political factions in Texas in the years before and after the Civil War, including a sentiment that Texas should become a state of Mexico.  The successionists won the day and Sam Houston resigned, rather than oppose the majority.  Texas took the necessary steps to join the Confederacy.

Despite being on the losing side in the anti-successionist effort, Throckmorton volunteered for and helped organize an area mounted rifle company in 1861 that operated for a few months before it was dissolved as Confederate units took their places.  Throckmorton joined the 6th Texas Cavalry which saw action in the trans-Mississippi campaign.  He rose to the rank of major before being medically discharged in 1863, again due to his chronic kidney condition.  He still desired to serve and was commissioned as a brigadier general in Texas’ First Frontier District.  In 1865, he was appointed commissioner of Indian affairs where he was to remain until the end of the war during which time he was given the nickname “Old Leathercoat.”

After the war, he served as Chairman of the Texas Constitutional Convention in 1866 and won the election to serve his one term as governor, only to be removed by Philip Sheridan, the commander of the Military District of the Gulf under Reconstruction and prohibited him from holding public office.  The Texas Constitution of 1866 included many provisions required for Texas to be admitted to the Union, but had fallen short of allowing Negroes to vote or hold public office.  The ban under Sheridan’s order lasted until 1872 when under the General Amnesty Act, Throckmorton was again allowed to run for office.  He served a total of four years in the United States Congress.  During this time, he also unsuccessfully campaigned for governor two more times.  Following this, he retired from politics and returned to his law practice.  Throckmorton died in 1894 from complications after suffering a fall and is buried in Pecan Grove Cemetery in McKinney, Texas.

One thought on “James Webb Throckmorton, 12th Governor of Texas”