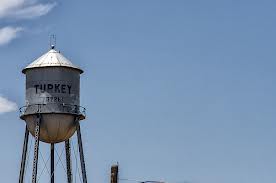 Its name comes from the nearby Turkey Creek and the community was originally known as Turkey Roost because of the wild turkeys that were found on the creek.  It was thought to have been settled in the 1890s and a Methodist church congregation was established in 1892.  The current name of Turkey was first used when the first post office was set up in 1893.  The first train service arrived about 1928.  It currently houses around 500 residents.

Turkey’s most famous resident was musician Bob Wills (1905-1975), who is considered to be a pioneer in the musical genre of Western Swing.  He was formerly a barber in Turkey and began playing dances on the weekends.  He was a fiddler and one of his first bands was the Light Crust Doughboys, organized by W. Lee “Pappy” O’Daniel in 1931.  O’Daniel used the group to promote Light Crust flour produced by Saginaw’s Burrus Mill and Elevator Company on Fort Worth’s radio station KFJZ.  Initially, the band members were required to be employees of Burrus Mills.  Bob Wills was a truck driver there.  After a few years, Wills left the group to form the Texas Playboys which performed live music for nearly 40 years.  The Playboys had many different musicians over the years but Wills fronted the band on fiddle until his health forced him to retire around 1970.

The Bob Wills Heritage Foundation was formed around 2007, after Wills’ Lifetime Achievement Award from at the Grammy Awards.  The foundation is organized to” recognize outstanding artistic significance in the field of recording.”

Following Wills’ death in 1975, the annual celebration “Bob Wills Day” began to be celebrated in Turkey.  It is held the last Saturday in April and includes a BBQ Cook-off, live music and dancing.  On that day, the town is filled with RVs and accommodations are full for miles around.

Today’s 2015 celebration will be the 44th Annual Bob Wills Day and Asleep At the Wheel will perform.