The Texas Prison Rodeo (earlier known as the Huntsville Prison Rodeo) was an event that Texans looked forward to for many years.  It began in 1931 when  Marshall Lee Simmons, then serving as general manager of the Texas Prison System, conceived of it as a means for the prisoners to have recreation and as entertainment for the prison employees and their families but it quickly grew to a ticketed event that would play to a full grandstand of 14,000 to 15,000 people per performance.  The event covered costs and raised money for an inmate treatment, education and recreation fund for the prisoners.  Eventually the performances were held each Sunday in October and would total as many as 100,000 attendees per season.  In its later years, it would not be unusual for the prison rodeo to earn $450,000 in a season for the inmate fund.

END_OF_DOCUMENT_TOKEN_TO_BE_REPLACED

Posted by Texoso on August 31, 2017 in outlaws and crimes, rodeo

One of the more unique and recognizable names in Texas was Miss Ima Hogg.  Her father was James Stephen Hogg, the first native born governor of Texas, who served as governor from 1891 to 1895.  James and Sarah Ann Stinson Hogg had three sons and Imogene, their only daughter.  It is not known for certain who Imogene was named for, but the story is told that James had a brother named Thomas Elisha Hogg, a Confederate Captain, who had written a Civil War poem “The Fate of Marvin.”  The poem was about a Southern girl named Ima who had cared for a Union soldier.  There are some stories floating around that she had a sister named Ura, but according to published genealogy records, Ima was the only daughter of Jim Hogg and Sarah Stinson Hogg.

END_OF_DOCUMENT_TOKEN_TO_BE_REPLACED

Goodnight is a name that calls to mind cattle drives from North Texas to Wyoming or Montana and also the start of ranching in the Panhandle.  Charles Foxwing Goodnight, Jr. was born in Illinois, not too far north of St. Louis, Missouri to farmers Charles and Charlotte Collier Goodnight in 1836.  His father died five years after this and his mother married Hiram Henry Daugherty, a farmer who lived nearby.  A few years later in 1845, the family headed for Texas, settling between what is now Milam County between College Station to the east and Austin to the west.  Charles did not receive much formal schooling and began working as a cowboy to help the family get by.  His first stepfather Daughterty also died not long after arriving in Texas.  His mother then married a minister by the name of Adam Sheek in 1853.  Goodnight and a step brother, John Wesley Sheek, began a ranching operation and around 1857 they relocated it further up the Brazos to what is now Palo Pinto County.  Once they got settled, they brought the family with them.

END_OF_DOCUMENT_TOKEN_TO_BE_REPLACED

Posted by Texoso on August 17, 2017 in ranches, ranch families 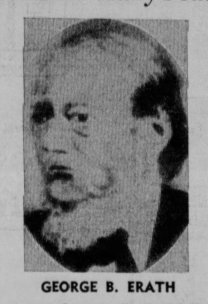 George Bernard Erath was born in Vienna, Austria in 1813.  He was educated at Vienna Polytechnic Institute where he studied liberal arts.  Young Erath lived on his own and worked for a few years in Europe, eventually setting sail for America.  One of the reasons given for his departure was that he did not want to be drafted into service for the Austrian Army.  Whatever his justification for not wanting to serve in Austria, he would show no reluctance whatsoever to fight for the State of Texas.  In fact, he spent years doing just that.  He arrived in America in the summer of 1832 in New Orleans.  He then worked in Cincinnati, Ohio before returning to the South again in Florence, Alabama for a short time.  Erath then relocated to Texas in 1833 where he would remain for the rest of his life, entering at Brazoria on the Gulf and settling in Robertson County.

END_OF_DOCUMENT_TOKEN_TO_BE_REPLACED

Jackson was a Texas Ranger during most of his law enforcement career, serving in the Uvalde area and later in Alpine.  He was born in 1935 and hired on with DPS briefly before becoming a Texas Ranger.  He served a total of 27 years with the Texas Rangers before retiring in 1993.

END_OF_DOCUMENT_TOKEN_TO_BE_REPLACED

Posted by Texoso on August 3, 2017 in biography, texas rangers