Lt. Col. William Edward “Ed” Dyess was born August 9, 1916 to Richard T. Dyess, a judge, and Hallie Graham-Dyess in Albany, Texas.  Dyess grew up working on the family farm and also held a number of odd jobs.  He was a Boy Scout, but had trouble attending meetings while he was also working.  The story is told of him that one week, a carnival had performed in Albany about the same time as he brought home a poor report card from school.  He is said to have told his parents that it was all right, he was going to join the carnival anyway when he got older.

In a book about his life, “The Dyess Story,” it tells that he learned of flying and took some rudimentary flying lessons from barnstorming pilots that came to the area.  Upon his graduation from Albany High School, he enrolled at John Tarleton Agricultural College (now known as Tarleton State University) in Stephenville, where he graduated in 1936.

Dyess then enlisted in the United States Army, receiving training as a pilot at Kelly and Randolph Fields in San Antonio, Texas.  One year later in October 1937, he was transferred to the United States Army Air Corps as part of the 20th Pursuit Group at Barksdale Field in Shreveport, Louisiana at the rank of Second Lieutenant.  Not long afterward, Dyess was named Commanding Officer of the 21st Pursuit Squadron at Hamilton Field in San Francisco, California and held the rank of First Lieutenant.  There he met and married Marajen Stevick.  A crew chief who served with him there described Dyess as being a leader, a brave man and a capable pilot.  He said of Dyess that he had a sense of urgency, trying to instill his trainees with combat skills that would soon be needed, in light of the approaching inevitable conflict.  Weeks before the Japanese attack on Pearl Harbor on December 7, 1941 and the attack on the Philippines later that week, the outfit was posted at Nichols Field on the south side Manila.

The war in the Philippines escalated quickly for Dyess and his squadron.  His group took a number of casualties and Dyess was named Commanding officer of all field aircraft units there.  Dyess was assigned to fly a P-40 Tomahawk and the outfit was relocated to near Bataan, on the other side of the western peninsula making up Manila Bay.  The unit learned that Japanese vessels (tankers, transports, one cruiser and several destroyers) were pulling into Subic Bay, northwest of Bataan.  Dyess and his fellow flyers attacked the ships.  During the battle, Dyess was given credit for sinking a Japanese ship and damaging several others.  Japanese radio exaggerated the United States attack by saying that their ships were attacked by numerous four-engine bombers and forty to fifty fighters.  Although he and his unit dealt out damage to the oncoming Japanese that day, the conditions around Bataan rapidly continued to deteriorate.  A number of pilots and all remaining aircraft were evacuated but Dyess refused to leave, reportedly giving up his own aircraft to Lt. Jack Donaldson who was able to fly to Australia in it.  His unit was reduced to 175 men and 25 officers, with no working aircraft.  No longer able to fly missions, Dyess and the remaining troops were assimilated into the 71st Infantry Division and were captured by the Japanese on April 9, 1942.

Dyess and many others were forced to walk north and further inland in what became known as the Bataan Death March, where his former crew chief last saw him.  Dyess survived the march and from June to October 1942, he was interned at the Japanese prison camp at Cabanatuan after a short time at Camp O’Donnell.  He and others were later transferred via the Japanese vessel Erie Maru to the Davao Penitentiary Unit at Mindanao.  On April 4, 1943, Dyess, two Philippine prisoners and nine American prisoners were able to escape.  They managed to link up with Filipino guerrillas and evade capture until Dyess was evacuated in July 1943 aboard the U. S. S. Trout to Australia.

His story was told in American newspapers after it was posted by a New York Times combat reporter named Byron Darnton, who later lost his life in an airplane crash in New Guinea.  Though the possible positive morale effect of the Dyess story could have been huge, the story was initially suppressed by the United States government for fear of retaliation by Japanese against the remaining Allied POWs.

Dyess began his recovery and was transferred to Greenbrier Resort Hospital at White Sulphur Springs, West Virginia.  He was discharged from the hospital in September 1943 and began receiving conversion training in the Lockheed P-38 Lightening.  He was reluctant to speak of his POW experiences, but instead deflected attention to those who were unable to escape.

“The Dyess Story” was about to be released and Dyess was entitled to advance money for it.  Now classified as a Lieutenant Colonel, he did not draw on the funds, but placed them in a special account which was to be donated to Army Air Corps relief funds and the American Red Cross, earmarked for his fellow prisoners.  He continued on to his posting in California to receive P-38 training with the 337th Fighter Squadron, 329th Fighter Group.  On December 22, 1943, Dyess was on a training flight in his P-38 when an engine caught fire and failed as he was flying over a residential area in Burbank, California.  Rather than bail out and have the plane go down on its own, he opted to remain with the aircraft and try to force a landing in an uninhabited area.  Dyess was killed in the crash landing of the aircraft into a vacant lot. 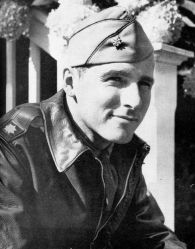 (Image is in the public domain)

After having been serialized in the Chicago Tribune, “The Dyess Story” was published in 1944, after Lt. Col. Dyess’ death.  The book is still available in print and may also be downloaded.  It related Dyess’ first-person account of his experiences in the Philippines, before and after the fall of Bataan, including in detail the telling of brutal treatment of the prisoners, his captivity and escape.

Lt. Col. Dyess will always be remembered for his courage.  It was said of him that if a risky mission needed to be flown, nine times out of ten, he would take it on himself.  He was also well known for slow Texas drawl and his sense of humor.  Once when things were rough in the Philippines, he asked an enlisted man “Do you know where I would like to be right now?”  Answering his own question, he said, “Back on my old man’s farm staring at the north end of a south-bound mule!”  He was known as well for his positive mental attitude throughout his life.  When the Philippines fell to the Japanese, he believed it to be temporary, and that it was only a matter of time until it would be retaken.

Lt. Col. Dyess is buried in his home town of Albany, Texas.