Bass Reeves was a groundbreaking lawman in the West.  Most people who know his name would be aware that he was born a slave and became a respected law officer mostly in the area that became Oklahoma, long before it became a state.

Reeves was born into slavery in 1838 in Crawford County, Arkansas on the property of former Arkansas state legislator, William Steele Reeves.  Authoritative accounts say instead that he was born in Texas.  His last name was that of the owner William Reeves and his first name is believed to have been in honor of a grandfather by the name of Bass Washington.

In the middle 1840s, the William Reeves family moved to Grayson County, Texas in the Peters Colony along with their slaves and including Bass.  Bass Reeves may have later become a slave of George Reeves, son of William Reeves.  Bass is said to have been brought along with George Reeves as the latter served in the Civil War.  There are tales of an altercation involving Bass and George Reeves over a card game after which Bass Reeves fled to Indian Territory to avoid punishment for beating his owner.

Bass is said to have lived among the Seminoles, Cherokee and Creek tribes until the Thirteenth Amendment to the United States Constitution abolished slavery in 1865.  Although Reeves is believed to have never been taught or otherwise learned to read or write, he became fluent in several Native American tongues, including Creek and Seminole, which would benefit him later in his career.  Bass is then thought to have married Nellie Jennie from Texas after the war.  The couple moved to near Van Buren, Arkansas where he and Nellie farmed and raised a family of eleven children.  After first serving as a scout to other marshals, Bass became a lawman himself, among the first African Americans to serve in that capacity in the West under Isaac C. Parker, federal judge of the Western District of Arkansas.  Judge Parker began holding court in Fort Smith, Arkansas in 1875.  Judge Parker was authorized to appoint one United States Marshal and hire as many as two hundred deputies.  That same year, he commissioned Bass Reeves as a deputy United States marshal. 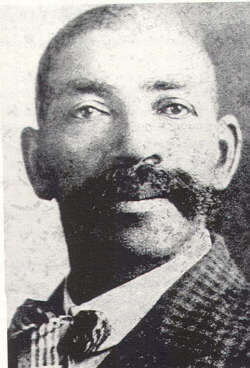 (Image credit: believed to be in the public domain)

Reeves was physically strong and was known for his shooting accuracy.  He was also respected as a competent and capable lawman and brought many fugitives to justice before Judge Parker, known as a “hanging judge.”  An incident occurred in which he was accused of killing his trail cook.  Reeves was tried and acquitted of murder in 1887 and went back to his work as a deputy marshal.

Reeves eventually left work as a federal marshal and took a position as a city police officer in Muskogee in 1908.  This was front page news in the Muskogee Daily Phoenix and Times Democrat.  The article announcing his hiring cited his twenty year career as a federal marshal.  In those days, African American officers served their ethnic community and this was also cited in the piece.  Reeves was about sixty-nine years old at the time and no longer required to apprehend dangerous criminals.  He mostly served civil subpoenas.  His tenure in Muskogee was not to be long, as the great lawman died in 1910 of Bright’s disease, a chronic ailment involving inflammation of the kidneys.

His biographer, Art T. Burton, author of “Black Gun, Silver Star: The Life and Legend of Frontier Marshal Bass Reeves” would say of him, “Bass Reeves was arguably the premier law enforcement officer of that era and is one of the greatest American heroes of the western frontier.”

Reeves is buried in Agency Cemetery in Muskogee, Oklahoma.  During his long career, he was known for having arrested more than three thousand fugitives.  He even was known for having arrested his own son, who had been charged for the murder of his spouse.  His son was tried, convicted, sentenced to prison in Leavenworth.  After serving some of his sentence, the son received a full pardon and went on to an honorable life.

The life of Bass Reeves has been dramatized and also fictionalized in a number of feature films.  Among his many honors, Reeves was celebrated in 2011 by the naming of a bridge over the Arkansas River outside Muskogee, Oklahoma as the Bass Reeves Memorial Bridge.  In 2012, a bronze statue of Reeves created by sculptor Harold Holden was placed in Pendergraft Park in Fort Smith, Arkansas from which he served for many years.  Reeves was also honored by being awarded the National Cowboy Hall of Fame’s “Great Westerner Award.”

Posted by Texoso on October 31, 2019 in biography, black history