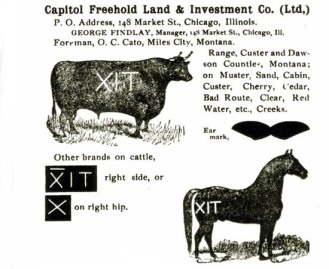 The XIT was once one of the largest ranches in Texas, comprising 3 million acres along the Texas-New Mexico border in the Panhandle area of the state.  In 1879, the State of Texas was looking for funds with which to build the Capitol building.  The Texas Legislature appropriated the remote Panhandle acreage to a syndicate led by Illinois natives John and Charles Farwell in exchange for an agreement to build the Austin structure.  The original cost of the Capitol building was projected to be $1,500,000 but wound up costing about $3.7 million with the syndicate funding all but about $500,000 that the state picked up.

The ranch included parts of 10 counties at its peak: Dallam, Hartley, Oldham, Deaf Smith, Parmer, Castro, Bailey, Lamb Cochran and Hockley.  It is only a popular legend that “Ten in Texas” inspired the famous brand, XIT.  The accepted story however, is that rancher Abner Blocker scratched the brand in the dirt with the heel of his boot in order to illustrate a brand that would be hard for rustlers to change.

The original concept of the syndicate was to profit by subdividing and selling off smaller portions as ranches, a concept that might have worked, but early on it began to operate as one large enterprise.  The owners fenced the entire area, roughly 260 to 275 miles long and 40 miles wide.  The cedar post and barbed wire project cost $181,000.  John Farwell created the Capitol Freehold Land and Investment Co. Ltd. to fund infrastructure (windmills and structures) and other improvements to the ranch and bought a herd of mostly Texas longhorn cattle.  By the mid 1880s, the operation was underway and they began adding Hereford, Durham and Angus to the herd.  According to the Fort Worth Daily Gazette of August 18, 1891, the first “beeves” were shipped the day before.  The paper reported that the first trainload left Farwell Park in Channing for Chicago and that the ranch planned to ship another 200 cars of beeves on the 28th for the the Chicago market.

Cattle rustling was a recurring problem over the years.  The ranch reportedly hired cowboys as well as gunmen to help combat the issue.  The many miles of fencing what was formerly open range initially led to conflicts.  There may have been more incidents but the one documented murder involved XIT Ranch manager John Armstrong who got into a disagreement over the ownership of a cow.  John W. Williams of a nearby ranch claimed to be the owner of a cow that had been butchered by Armstrong and an associate.  The two met near a depot in Bovina on November 18, 1908 where Williams shot and killed Armstrong with his .30-30 rifle as Armstrong rode up on his horse.  The victim Armstrong has sometimes been erroneously identified in print as John Barclay Armstrong, the former Texas Ranger who helped capture John Wesley Hardin, or sometimes as the grandson of the famous Ranger.  The victim was actually John Robert Armstrong, born in Missouri and a former Union soldier during the Civil War.  He was buried in Farwell, not quite 40 years old at the time of his death, whereas the former Texas Ranger lived to about the age of 63 and is buried in old Oakwood Cemetery in Austin.

The original ranch headquarters were originally near the old town of Tascosa (now the site of Cal Farley’s Boy’s Ranch) but the first rail line, the Fort Worth and Denver City Railroad, crossed the ranch elsewhere, so the headquarters were moved to a newly created town of Channing.  Channing became the county seat of Hartley County in 1902.  Over the years, there were numerous natural problems with predators, range fires and periods of drought in addition to economic business risks including the cycles of cattle prices, fence cutting and rustling.  The most active days of the ranch coincided with an extended down cycle in cattle prices.  The ranch is not known to have ever shown a profit and shortly after 1910, the syndicate voted to dissolve when the bonds financing it began to mature.  Large and smaller plots were sold until the huge ranch was dissolved.  The Matador Ranch acquired 200,000 acres and George Littlefield acquired 236,000 acres.  Other large parcels were acquired by the Halsell and Shelton families and by 1915 the large spread was essentially down to a shadow of its original acreage.

If you drive through the Panhandle town of Dalhart in early August, you will still see promotion of the annual XIT Rodeo and Reunion.  The ranch records are located in the Panhandle-Plains Museum in Canyon, Texas.  There is also an XIT Museum in Dalhart that houses artifacts from the once large enterprise.  Numerous businesses memorialize it by using XIT in their names and advertising.

Posted by Texoso on September 29, 2016 in ranches, ranch families