Lady Bird Johnson was born Claudia Alta Taylor in Karnack, Harrison County, Texas in 1912.  Her father was Thomas Jefferson Taylor II, who owned a general store and used the profits to acquire farmland that he used to plant cotton.  At one time he owned 12,000 acres of land dedicated to raising cotton.  Claudia’s mother was the former Minnie Pattillo.  Thomas and Minnie were married in 1900 and both had originally come to Texas from Alabama.  Claudia was the youngest of three children and the only daughter born to Minnie and Thomas.  The family legend is that a caretaker had given the nickname Lady Bird to her, saying that she was as pretty as a lady bird.

END_OF_DOCUMENT_TOKEN_TO_BE_REPLACED

Posted by Texoso on November 7, 2019 in biography, texas women

Ann Miller was the stage name of Johnnie Lucille Collier, born April 12, 1923 in Chireno, Nacogdoches County, Texas.  Her father was John A. Collier, a criminal defense lawyer known for representing clients such as Baby Face Nelson, Machine Gun Kelly and the Barrow Gang. Her mother was the former Clara Emma Birdwell.  As a young girl, Johnnie suffered from rickets and took dance classes to help strengthen her legs.  She also studied piano and violin.  The family moved to Houston, Texas where she lived until she was nine years old.  Eventually her parents divorced and she moved with her mother to Los Angeles.

END_OF_DOCUMENT_TOKEN_TO_BE_REPLACED

Posted by Texoso on September 19, 2019 in biography, entertainers, texas women

Sarah Horton was born in Virginia on 13 January 1819 to Enoch and Martha Stinson Horton.  She moved with her family to Dallas County, Texas near Eagle Ford in 1844, becoming one of the pioneer families in the area.  In September of 1847, she married Alexander Cockrell.

END_OF_DOCUMENT_TOKEN_TO_BE_REPLACED

Mildred Ella Didrikson was born June 26, 1911 to Ole and Hannah Marie Olsen Didriksen in Port Arthur, Texas.  Her father was a carpenter in the maritime industry.  When she was three years old, the family moved to Beaumont, Texas where she went to public school.  She was a gifted athlete and excelled at about every sport she participated in.  She picked up her nickname “Babe” (after Babe Ruth, the baseball star) after slugging five home runs in a baseball game, though her mother said her nickname had been “Baby” earlier on.  She adopted the spelling Didrikson when she was an adult. 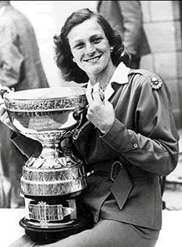 END_OF_DOCUMENT_TOKEN_TO_BE_REPLACED

Posted by Texoso on May 2, 2019 in biography, texas women

Belle Starr, the famous “female outlaw” was born Myra Maybelle Shirley on February  5, 1848 to John and Elizabeth Shirley in rural Missouri near the town of Carthage.  It was a time when bandits, either male or female, were celebrated in some ways.  Her family lived on a farm.  Reportedly, they were also slave owners in a time when strong attitudes for or against slavery divided residents especially in so-called border states.  Her family later sold their rural property and moved into Carthage where they ran the inn and several other businesses.  The civil war came and a brother joined the Confederate army and more specifically the controversial outfit known as Quantrill’s Raiders.  Her brother Bud Shirley was killed in Missouri in a skirmish between Union and Confederate troops.  The economy had generally deteriorated in Missouri because of the war and the Shirleys packed up and moved to near Scyene, Texas, at the time located southeast of Dallas, around 1864.

END_OF_DOCUMENT_TOKEN_TO_BE_REPLACED

Posted by Texoso on April 4, 2019 in biography, outlaws and crimes, texas women

Minnie Lou Ottinger Bradley was born December 15, 1931 to Thomas and Zulema Young Ottinger in western Oklahoma.  At an early age, she showed a strong interest in livestock as she grew up on the family wheat farm.  She joined the 4-H Club and actively participated, although the Future Farmers of America (FFA) was then limited to male members.  While in 4-H, she exhibited Angus cattle, sheep and swine.  At age ten, she won a blue ribbon at the Oklahoma State Fair for sheep raised on her ranch.  After graduating from high school in Hydro, Oklahoma she enrolled at Oklahoma State University, first chartered as Oklahoma Territorial Agricultural and Mechanical College in 1890 and then commonly known as Oklahoma A&M.  She was the first female student to enroll in animal science, graduating in 1953 and minoring in agricultural journalism.

END_OF_DOCUMENT_TOKEN_TO_BE_REPLACED

In the Roman Catholic tradition, Santa Teresa is a saint.  Briefly, she was born Teresa de Cepeda y Ahumada in 1515 in Ávila, Spain.  She is known as St. Teresa of Ávila, and is considered to be one of the most devout women of the Roman Catholic Church.  She was known for her devotion to God through prayer and contemplation.  Santa Teresa died in 1582 and was canonized as a saint in 1622.

Not to be confused with the Roman Catholic saint, another woman born Niña Garcia Noña Maria Rebecca Chávez and known as Teresa Urrea, also Saint Teresa of Jesus, Saint Teresita Of Cabora or simply Santa Teresa in northern Mexico in 1873, had an interesting history as well and was connected to Texas and Mexico.  Her father is believed to have been Don Tomás Urrea and her mother was a Yaqui Indian by the name of Cayetana Chávez who was fourteen years old when Teresa was born.

END_OF_DOCUMENT_TOKEN_TO_BE_REPLACED

Posted by Texoso on February 7, 2019 in biography, texas women