Abraham Zapruder’s name became quite familiar to those of us who were old enough to remember the assassination of President John F. Kennedy in 1963.  Zapruder had been on the street at the exact time the attack occurred.  He and his employees had stopped work to enjoy the presidential parade and had been filming the event with his personal home movie camera.

Zapruder had been born in Kovel, Volyns’ka, Russia (Ukraine) in 1905 to Israel and Anna Zapruder.  He had emigrated to the United States when he was a teenager.  Arriving in New York City, he lived in the borough of Brooklyn for a number of years, finding work as a pattern maker in the garment business.  He married Lillian Shapovnick in 1933 and the couple had two children.  By the early 1940s, he had moved to Dallas, Texas, essentially working in the same field.

After moving to Texas, Zapruder started (or co-founded) his own company called Jennifer Juniors, Inc. and his Dallas office was located in what was known as the Dal-Tex Building at 501 Elm Street, which is located directly across Houston Street from the Texas School Book Depository where Lee Harvey Oswald is alleged to have fired the fatal shots that killed President Kennedy and wounded Texas Governor John Connally. 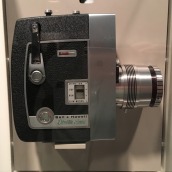 When he left for work that morning, Zapruder had inadvertently forgotten his camera, a Bell and Howell Director Series Model 414 Zoomatic 8-MM unit, but one of his employees had gone to his home and picked it up for him.  The office closed down in anticipation of the downtown parade.  From the place where he was standing, he was able to get a good view of the motorcade and unexpectedly caught the entire assassination sequence.  He actually witnessed the shot or shots that struck President Kennedy while looking through the viewfinder of his camera.  Zapruder is believed to have been standing on the “grassy knoll” on the north side of Elm Street in position to be able to see the fronts of the cars in the motorcade after they made the left turn from Houston Street to Elm Street.

After hearing the gunfire, he kept the camera rolling until the motorcade disappeared under the railroad overpass.  He realized the gravity of the situation, although confirmation of the President’s death was not broadcast for another half hour to an hour.

Zapruder was quickly located and contacted by local and national police.  His film was developed later that day and copies were made for investigators.  He later received many offers for rights to publish his images, and he reportedly sold the rights to Life magazine for $150,000, out of which he is known to have generously donated $25,000 to the family of the slain Dallas Police Officer J. D. Tippett.  The sum was paid out in six annual installments and the first installment went to the Tippett family.

Since then, his footage has been widely distributed and was a key piece of evidence in the lengthy government investigation by the Warren Commission that followed the assassination.

Abraham Zapruder passed away in 1970 from complications of stomach cancer.  He is interred at Emanu-El Cemetery in Dallas, Texas along with other members of his family.  Life magazine conveyed the rights back to the family for $1 in 1975.  The camera and original film footage was donated to the National Archives and Records Administration.

The JFK Act, officially known as the President John F. Kennedy Assassination Records Collection Act of 1992, was passed by the United States Congress.  Among other provisions, the Act created a collection to house all the artifacts and materials connected to the assassination and the investigation thereof.  The Act also created the Assassination Records Review Board, one of the responsibilities of which was to determine which documents might be released and when they might be released.  It has been reported that the Zapruder family was awarded a sum in the millions for their rights to the original film footage.  The family subsequently donated their collection of images to the Sixth Floor Museum in Dallas, Texas, along with a first-generation copy of the footage and the associated copyrights.  We intentionally did not post references to any of the many possible links to the Zapruder film but they can be easily found on the internet.

The Sixth Floor Museum is housed at the former location of the five story Southern Rock Island Plow Company, built in 1898.  That particular structure burned after a fire caused by a lightening strike about three years later and the current seven story structure was built on its foundation.  Over the next six decades, it was leased and used as the headquarters first for an air conditioning business and later a food distribution company.  In 1963, it was leased by the Texas School Book Depository for about the next ten years.  Dallas County acquired the building in 1977, using it for County business with the upper floors mostly remaining vacant.  The Sixth Floor Museum at Dealey Plaza opened in 1989.  The sixth and seventh floors are devoted to the life of President Kennedy and the story of the 1963 assassination.  Reportedly, at least about 350,000 individuals visit the museum each year.

Posted by Texoso on September 13, 2018 in biography, jfk assassination