Prior to the United States’ entry into World War II, a number of joint agreements were instituted between the United States and the United Kingdom, including the British Commonwealth Air Training Plan, the British Flying Training Schools and the Arnold Scheme. Each one involved training airmen from the U.K. at facilities in the United States.  The British Flying Training School involved seven locations where training was carried out.  From west to east, they were Lancaster, California; Mesa, Arizona; Sweetwater, Texas; Terrell, Texas; Ponca City, Oklahoma; Miami, Oklahoma and Clewiston, Florida.  The school at Sweetwater was only open a few months, but the school at Terrell was in operation from 1941 to 1945.

The southern United Sates was preferable to training in the United Kingdom for a number of reasons including the crowded skies, the heavy military activity that was already underway in England and the traditionally better weather that one could expect especially in the western United States.  The facility in Terrell, Texas was one of the first two to open, on June 9, 1941.

In Terrell, at the Number 1 British Flying Training School, more than 2,200 pilots were trained during the four years of the war.  There were at least twenty fatalities during the training and many of those victims are buried in the local cemetery.  A search of online newspaper archives reveals the reports of several incidents in which British cadets were killed.

One flight instructor was Frank Veltri who served at the Clewison, Florida school which operated by Riddle McKay Aero College of Miami.  The school at Clewiston had trained around 1,450 cadets.  In a newspaper interview many years after the war, Veltri reflected back on his experiences.  “Aviation has been one of the happy times of my life.” he said.  He had learned to fly in 1938 back in Nashville, Tennessee, borrowing $80 for flight lessons.  When the war broke out, he was declined by the military, but heard that the flight school in Clewiston needed instructors.  He practiced earnestly and went to Florida where he was hired for the job.

While in Florida, he crashed twice with students.  The first time, his PT19 trainer stalled out but they were able to set the aircraft down in the Everglades with no injuries to himself or his student.  The second time, in an AT6, the aircraft went down in a sugar field near Lake Okeechobee.  This time, he received a broken nose but otherwise came through it all right.

Veltri kept mementos of those days including scrapbooks of photos.  He knows that some of those he taught to fly were lost to combat or accidents after they left the flying school.  After Clewiston closed in 1945, he remained in the area and went into business after being declined by all the airlines for being too old.  He looked back fondly over his days at the flying school. 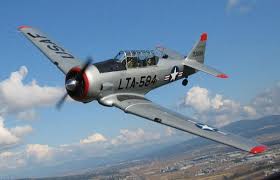 The AT6 “Texan” pictured above was manufactured by North American Aviation.  The  design originated in 1935 and during its run, 15,495 of them were built, a number of which still survive today.  During its run, there were many design changes but this is a representative look of the aircraft used in the days of the British Flying Training Schools.

In Terrell, Texas at the municipal airport, a museum has been created to memorialize the Number 1 British Flying Training School that operated there.  It is typically open from 10 am to 4 pm Wednesdays through Saturdays.  (Note: At this writing, the museum is closed due to the coronavirus outbreak.)  Its stated mission is “To celebrate, the spirit and sacrifices made by those men both British and American, who trained to be pilots at the Number 1 British Flying Training School (1BFTS); to educate all ages of all nationalities as to the history and importance of the cooperation between the British Commonwealth and American Government in both war and peace; to honor the strong bonds of friendship formed between the cadets and the community of Terrell and the North Texas area.”

7 thoughts on “British Flying Training Schools in the WWII Era”