Benjamin McCulloch was one of twelve children.  He was born November 11, 1811 in Rutherford County, Tennessee to Alexander and Frances Fisher Lenoir McCulloch.  His father was a graduate of Yale College and served in the United States Army in Indian campaigns and also the War of 1812.  The family migrated west from the eastern coastal states.  Ben is thought to have first pursued some other businesses and moved around a lot until he came to Texas in 1835 with another brother and Davy Crockett, a neighbor, in Tennessee.  Ben planned to meet up with Crockett and then head from Nacogdoches to San Antonio but was held up as he recuperated from a case of the measles, not arriving in San Antonio until after the Battle of the Alamo.  He joined Sam Houston and the Texas Army in time for the Runaway Scrape, Houston’s retreat from Santa Anna.

END_OF_DOCUMENT_TOKEN_TO_BE_REPLACED

Juan Nepomucema Seguin was born in Spanish San Antonio on October 27, 1808 to Juan José Erasmo and María Josefa Becerra Seguin.  Erasmo was descended from one of sixteen families who came to the San Antonio area from the Canary Islands in the early 1700s.  The Seguin cattle ranch covered portions of three current Texas counties: Bexar, Guadalupe and Wilson.  Erasmo served as postmaster of San Antonio from 1807 to 1835, mayor (alcalde) of San Antonio from 1820-1821 and quartermaster of Presidio de San Antonio de Béxar from 1825 to 1835.  Erasmo was acquainted with Moses Austin who was succeeded by his son, Stephen F. Austin.  Along with Don Martin de Veramendi, Erasmo assisted them in obtaining their Austin Colony grant. 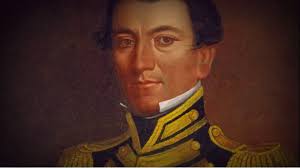 END_OF_DOCUMENT_TOKEN_TO_BE_REPLACED

Santa Anna (Antonio López de Santa Anna) was born in Vera Cruz in 1794 and began serving in the Army in Spanish Mexico when he was a teenager.  He was said to have first fought in support for the Spanish against Mexican independence before joining the movement in 1821 in support of an independent Mexico.  He continued to be near the forefront of leadership in the young country of Mexico and helped defeat the Spanish effort to reclaim Mexico in the late 1820s.  Santa Anna was himself elected President in 1833.  The previous two decades had seen chaotic changes in the country of Mexico with the form of government varying from a constitutional republic to a centralist form with Santa Anna at the head, supported by the military.  The country was vast with the Central American part being largely populated and the North American portion being sparsely populated by Native American tribes and an increasing number of American settlers.  Under Santa Anna, its policy changed from encouraging settlements to being more restrictive toward them.

END_OF_DOCUMENT_TOKEN_TO_BE_REPLACED

Mirabeau Buonaparte Lamar was the second president of the Republic of Texas. He was born in Georgia in 1798 to John Samuel III and Rebecca Lamar.  One of the youngest of eight children, Lamar was self educated, having been accepted to Princeton University, though he declined.

END_OF_DOCUMENT_TOKEN_TO_BE_REPLACED

Posted by Texoso on October 19, 2017 in biography, governor, poetry, republic of texas

Before the Texas Revolution, the official religion of the area was Roman Catholicism according to Spanish law.  Landowners were required to espouse the Roman Catholic faith and many did so in order to obtain title to their land.  However Protestant families moved to the area prior to and following the Texas Revolution.  R. E. B. Baylor, a Baptist, came to Texas in late 1839.  By then, there were already a number of Baptist families in Texas.  After a couple of failed efforts, the Baptist Union Association was formed in the fall of 1840 and included churches from La Grange, Travis and Independence.  Baylor was a circuit judge and was an ordained minister.  By about 1845, there were hundreds of fellow Baptists in the area.  Among other things, the Association had been concerned about education and formed an Education Society of which R. E. B. Baylor was selected to be President.

END_OF_DOCUMENT_TOKEN_TO_BE_REPLACED

Posted by Texoso on June 1, 2017 in biography, republic of texas