Erastus “Deaf” (pronounced “Deef”) Smith was an admirable person in “Texas Rising” and one in which the character of the individual may closely match the one portrayed in the miniseries.  His hearing loss was not complete, but was significant after suffering an illness some years prior to the Texas Revolution.  In some accounts, it was referred to as “consumption” (most likely, tuberculosis) which may have contributed to his death, though contemporary accounts were not specific as to the actual cause of death.  One newspaper account simply read, “His iron frame has sunk under the severe fatigues and exposures to which he has too willingly subjected himself.” 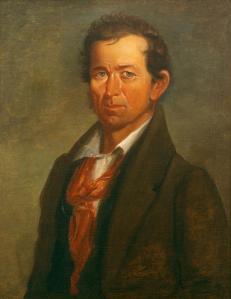 Smith was born in New York in 1787.  His parents, Chiliab and Mary Smith, moved to Mississippi when he was a boy.  He first came to Texas on his own in 1817, but returned home for a time.  He came to Texas permanently in 1821 and settled in Bexar (San Antonio), possibly near Mission San José.  In the old parish church that eventually became the San Fernando Cathedral, he married Guadalupe Ruiz Durán of Guanajuato, Mexico the following year.  Guadalupe was the widow of Jose Maria Vincente Durán whom she had married in 1812.  In 1825 Smith settled in Green DeWitt’s Colony, a Mexican land grant situated southwest of Austin’s Colony (and a very interesting story of its own).  The area near present day Gonzalez was selected as the capital.  It is not completely known how he supported himself and his family during this period, but he was a good tracker and would have known the layout of the area well.

By 1835, the Texas Revolution had begun.  The Mexican Army commanded by Gen. Perfecto Cos was under siege in San Antonio.  Smith was conflicted since his wife was born in Mexico and his family was living in San Antonio, so he did not wish to choose sides.  Austin’s Army was encamped a few miles away and Smith, who had been away, requested and received permission from the Texas Army to try and visit his wife and family inside the town.  He was reportedly refused entry and also attacked when he tried to enter the city to see his family, leading him to join Stephen F. Austin’s army.  In the months that followed, Smith’s gifts as a spy, scout and tracker became apparent and he was eventually able to contact his family.

He is credited for several discoveries leading to success in the battle of (Mission) Conceptión and the Grass Fight in which a Mexican supply train was discovered, all in the San Antonio area and was instrumental in the success of the siege.  He was wounded while on top of the Veramendi House, in the same skirmish that Ben Milam was killed, and his actions were noted by Governor Henry Smith (no relation to Deaf Smith).  The city was taken and Gen. Cos and his remaining forces were allowed to return to Mexico.  A small garrison was left at the Alamo, first under Colonel Neill and later under William B, Travis.  This fact became known to Gen. Santa Anna, dictator of Mexico, who had assumed command of the Mexican Army, and the General set out to retake the the Alamo.

For a time, Smith served Col. Travis as messenger but eventually he was reassigned to Houston’s command.  The Army had been reorganized under Thomas Jefferson Rusk and Sam Houston after Austin’s health had begun to fail him.  Austin would eventually die in late 1836 at the age of 43.  Houston sent Smith back to San Antonio in mid March to find that the garrison had fallen to Santa Anna.  Mexican General Urrea had gone on to to defeat Colonel James W. Fannin, Jr. as Fannin and his troops attempted to retreat from Goliad.  Most of the Texas troops and Fannin were all either killed in the skirmishes or massacred at Santa Anna’s direction after their surrender.

After the defeat of Fannin, Smith served the Texas Army under Houston in various capacities as it regrouped, including training of recruits and performing various reconnoitering assignments.  He was able to acquire significant items of intelligence leading to the discovery of the Mexican Army’s location and strength at San Jacinto.  Houston assigned to him the task of destroying Vince’s Bridge, which served to cut off Mexican reinforcements and isolate the opposing forces in San Jacinto’s swampy ground.  Santa Anna, General Cos and all of the key leadership of the Mexican Army at San Jacinto were either killed or captured on April 21, 1835.  About a month later, Santa Anna would sign the treaties leading to the birth of the Republic of Texas.

Following the defeat of the Mexican Army at San Jacinto, Smith remained in the Army for a while before resigning his commission. He later raised a company of Texas Rangers and served as its commander.  It’s believed that his poor health forced him to resign as a Ranger and he moved to Richmond in Ft. Bend County.  He is thought to have died there at the residence of Randal Jones on November 30, 1837.  There is a headstone at Calvary Episcopal Churchyard Cemetery, but the best information available now indicates that his actual burial place is unknown.  However, he is most likely not buried at Calvary Episcopal Churchyard Cemetery, since the church was organized after Smith’s death.  Guadalupe survived him another 12 years and is interred in San Antonio.  Smith is celebrated as a hero among hearing impaired Texans for the way he persevered in spite of his hearing loss.  A number of schools are named for him, as is Deaf Smith County in the Texas Panhandle.  The Republic of Texas also honored him by printing his image on its $5 currency.

News did not travel as fast in those days, but on December 18, 1837 the Baltimore (Maryland) Sun carried the following well-deserved tribute to Smith: “This singular individual was one of the few men whose names alone bear with them more respect than sounding titles.  Major, colonel, general, sink into insignificance before the simple, ordinary name of Deaf Smith.  That name is identified with the battlefields of Texas; his eulogy is inseparably interwoven with the most thrilling annals of our country, and will long yield to our traditionary narratives a peculiar interest.” (Dateline Houston, December 2, 1837)