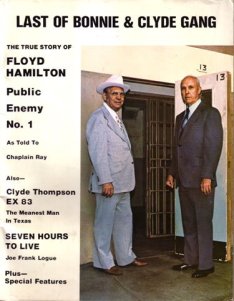 Floyd Garland Hamilton was born June 13, 1908 in Henrietta, Oklahoma to John Henry and Sarah Alice Bullock Hamilton and died July 24, 1984 in Grand Prairie, Texas at the age of 76.  According to his wishes, there was no funeral service, his body was cremated and his ashes were spread near the grave of his wife in Irving, Texas.

Floyd Hamilton was the brother of Ray Hamilton and both had been members of the gang with Bonnie and Clyde.  Floyd was not with the duo in 1934 at the time of their death, and continued robbing banks until his arrest and incarceration four years later.

Floyd and his brother Ray Hamilton had grown up in the same West Dallas neighborhood as the famous outlaws (and also several lawmen with whom he reconnected with later in life).  Floyd had met Bonnie when he was 12 and Clyde when he was 14.  Because of their early friendship with the pair, Hamilton and his brother became associated with them and participated in many of their criminal activities.  Eventually Ray was captured and confined at the East Texas Eastham Prison.  Floyd had participated in the prison break in which Ray and others were freed, but a prison guard died after having allegedly been shot by Ray.

After the 1934 Louisiana ambush in which Bonnie and Clyde were killed, Floyd continued to rob banks until he was apprehended.  He was initially arrested in 1938 and jailed in Montague County, but he and eight others escaped.  He returned to robbing banks and stealing cars, leading to his being named to the FBI’s Most Wanted List.  Floyd, Charles Chapman and Ted Walters were captured in the summer of 1938 after a series of southern bank robberies leading to Hamilton’s arrest, trial and imprisonment.  By then, his brother Ray had been executed for murder in May, 1935.  Some accounts say that Ray was executed for the murder of the Eastham prison guard, but he had already been convicted and sentenced for another murder.

Floyd Hamilton served 22 years in prison, 18 of those years in Leavenworth and Alcatraz, for armed robbery.  Before he was captured, he had been at one time denoted as the FBI’s “Public Enemy No. 1” and he used this title as the name of a book recounting his story.  Hamilton gave great credit to his religious conversion for his release and rehabilitation and spoke of feeling that he had a guardian angel, keeping him from death and steering him away from his criminal past.  Hamilton said that he had become a Christian during his incarceration at Alcatraz, as noted below.  After having unsuccessfully tried to escape in 1943, he was placed in Cell Block D, cell 13 (pictured above) in which he was held in solitary confinement.  For 21 days, he was fed bread and water and was confined without light or clothing.  Following this, he was allowed to contact his mother who said that she had a friend, Hattie Rankin Moore, who had been interested in helping Floyd to change his ways by turning his life over to God.

Hattie Rankin Moore was a woman from Highland Park in the heart of Dallas, but she had developed a passion for the people of West Dallas and spent countless hours ministering to them.  The City of Dallas has since recognized Mrs. Moore for her efforts in West Dallas by naming a park after her (Hattie Rankin Moore Park) and co-naming a community center also after her (Wesley-Rankin Community Center).  Hattie had become acquainted with the Barrow and Hamilton families before Ray’s execution and was praying with the Hamiltons in their home at the very moment that Ray’s execution occurred.  She continued to maintain a relationship with the family and later asked her Dallas pastor, W. A. Criswell, to go to Alcatraz and speak with Floyd, and Criswell complied.  Criswell related his recollection of that meeting in his sermons.  Floyd was ready for a change and became a Christian that day in his cell.  He told Criswell that he realized that he might not live beyond the years of his federal sentence, but if he did, he vowed to walk the aisle at Criswell’s church.  Hamilton became a model prisoner and eventually made good on his promise to the pastor.  He was also ministered to by Chaplain Ray of International Prison Ministries, and the two developed a long and close relationship.

Floyd served the final years of his federal sentence in Ft. Leavenworth in Kansas.  As he was being released from federal prison to come to Texas to face further charges, he shook hands with County Sheriff Arden Rhyne and thanked him for the treatment he received while in prison.  Some twelve years later, Rhyne and his wife took a vacation from Kansas to Texas and made it a point to visit Hamilton and his family.

Following his prison release, Floyd made a number of appearances on radio and television, including the Merv Griffin Show.  He also gave numerous talks to civic groups and was actively involved in Christian prison ministries with Chaplain Ray Hoekstra, founder of International Prison Ministries.

Until shortly before his death, Floyd worked for Dallas car dealer W. O. Bankston for 16 years as a trusted night watchman.  Bankston had hired Hamilton in 1958 upon his release from prison and said of him, “From the time he got out of prison to the time he died, he was one of the finest men I’ve ever known.”  Hamilton had become acquainted with the car dealer through the recommendations of former Dallas County Sheriff Bill Decker and retired peace officer Ted Hinton, who had been one of the lawmen who participated in the Louisiana ambush of Bonnie and Clyde.

Decker had vouched for Hamilton, who freely admitted his criminal past, because Decker truly believed that Floyd had reformed.  Bankston said that he was not disappointed in Hamilton and that he had proven to be an honest and reliable employee.  Bankston also reflected upon Hamilton’s volunteer speaking engagements and that he believed that they helped turn young boys and girls away from lives of crime.

Floyd believed that his presidential pardon was initiated by President John F. Kennedy shortly before Kennedy’s assassination, but it was consummated by President Lyndon B. Johnson.  After serving some of his Texas sentence, he also was pardoned by Texas Governor John Connally in the 1960s.  Floyd was predeceased by his wife Mildred only a few months before and by both of their children many years earlier.  At the time of his death, he had suffered from diabetes and it was said that his health declined rapidly after Mildred’s death.

It is granted that Floyd Hamilton will be remembered for his criminal acts and his association with Bonnie and Clyde.  However, as time passes there is a strong chance that he might become as well known for the way he reformed and lived out the rest of his life, in no small part due to the handful of people who took an interest in him.