Eddie Stinson had begun his career in aviation in San Antonio, Texas and was the brother of pioneer aviatrix, Katherine Stinson.  Katherine was a prodigy in the new world of aviation.  The youngest of four children, she had been captivated by the lure of airplanes, so much so that she sold her piano to raise the money for flying lessons.  The year was 1912, only a few short years after the Wright Brothers made their first powered flight in 1903.  Her first solo flight was in a similar-looking aircraft to the Kitty Hawk plane, which more nearly resembled a box kite than what we know as an aircraft.  She said that at the time, it was supposed to take 250 minutes of flying lessons to learn how to fly.  Katherine quickly took to it and indeed soloed after four hours of flying lessons.  Licensing requirements were not as strict back then.  Katherine said that all she had to do was climb to 800 feet, do some figure-eights, glide with the power off and make a smooth landing.  She was the fourth woman ever to obtain a pilot’s license.

END_OF_DOCUMENT_TOKEN_TO_BE_REPLACED

Posted by Texoso on November 9, 2017 in aviation, biography, texas women 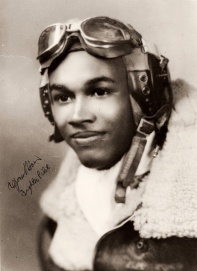 Alfonso Laurell Harris was born March 26, 1926 at old Parkland Hospital a few miles from his home.  He was a good student and entered Booker T. Washington High School at age 11, allowing him to graduate when he was just 15.  He he later moved to the Northwest and began working as an aircraft engine inspector in Ogden, Utah.  On July 14, 1944 he enlisted in the US Army, shortly after his 18th birthday at nearby Fort Douglas, Utah.  As it did for hundreds of thousands of others, the terms of his enlistment read “Enlistment for the duration of the War or other emergency, plus six months, subject to the discretion of the President or otherwise according to law.”

END_OF_DOCUMENT_TOKEN_TO_BE_REPLACED

Charles Lindbergh flew from New York to Paris, touching down at his destination on May 21, 1927.  He had won the $25,000 Orteig Prize and achieved almost instant notoriety around the world.  Lindbergh been the first to fly across the Atlantic Ocean in his Ryan monoplane he had named the “Spirit of St. Louis” that now hangs in the Smithsonian Institution in Washington, DC.  It took him 33 1/2 hours to cover the 3,610 miles.  Prior to this flight, Lindbergh had been a mail pilot when he’d heard of the prize and began to plan for the flight.