On Sunday, October 23, 1960, the Texas Prison Rodeo performance in Huntsville was slated to have a personal appearance by actor John Wayne, in Texas to promote the release of his film “The Alamo” in Houston the following week.  Scheduled to appear with Wayne was pop singer Frankie Avalon, who had been cast as the character known as “Smitty” in the film.  Wayne’s production was only the fourth of fifty-one film or television projects that Avalon appeared in, but he was at a peak of his career in pop music.  The previous year, his recording “Venus” was Number 1 for five weeks.  Between 1958 and 1962 between two and three dozen of his recordings hit the Billboard chart.  The rodeo arena was expected to be filled to capacity at around 30,000.

END_OF_DOCUMENT_TOKEN_TO_BE_REPLACED

A paragraph in a 1939 issue of a newspaper in Decatur (Illinois, not Texas) began “No. 1 Name of the year, so far, is that of Sheriff Smoot Schmid of Dallas, Texas.” 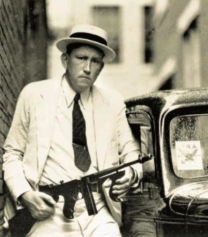 END_OF_DOCUMENT_TOKEN_TO_BE_REPLACED

His birth name was George Kelly Barnes, but he was better known as “Machine Gun Kelly.”  George was born in Memphis, Tennessee in 1895 (Alcatraz records say 1900) and lived much of his early life there.  He was in his 20s during the years of Prohibition (1920s and 1930s) when it was illegal to make or sell alcohol products.  He became a “bootlegger” who trafficked in illegal alcohol products, and this was a major source of income when he was in his twenties.  He was briefly married to Geneva Ramsey when he was about 19 years old.  Ramsey and Barnes had two sons, but were later divorced.

END_OF_DOCUMENT_TOKEN_TO_BE_REPLACED

“Cherokee Bill” was a name adopted by Crawford Goldsby, a youth born February 8, 1876 at Fort Concho in Texas.  He was actively an outlaw for several years, mostly across the Red River in Indian Territory, before he was apprehended.  His father was George Goldsby and his mother was Ellen Beck Goldsby.  His father was of mixed blood, part black and part white, and was a Buffalo Soldier in the 10th U. S. Cavalry.  His mother was also of mixed blood, part Cherokee, black and white.  Crawford was probably named for his father’s brother, also known as Crawford Goldsby, who lived and died in Alabama.

END_OF_DOCUMENT_TOKEN_TO_BE_REPLACED

John Henry “Doc” Holliday was born August 14, 1851 in Griffin, Georgia to Henry Burroughs and Alice Jane McKey Holliday.  He was an educated man, having first studied at Valdosta Institute, Valdosta, Georgia.  He learned to shoot and play cards when he was still a youth.  It is generally thought that he lived in the southeastern United States, fairly close to home, until his 20s.