Based on numerous books and accounts, Clyde Barrow is said to have favored the BAR (Browning Automatic Rifle) due to its .30 caliber bullet and rapid fire ability.  The BAR projectiles could also penetrate auto bodies.  The BAR (often known by its military designation of M1918) was designed by John Browning in 1917 for use in World War I by the American Expeditionary Forces in Europe as a replacement for the French-made rifles that they were first issued, though it did not come into everyday use until later.

Browning had been born in Utah in 1855 to a family affiliated with the Church of Jesus Christ of the Latter Day Saints (LDS).  He learned gun making in his father’s shop and is credited for the design of the BAR, the M1911 semiautomatic pistol, the M1919 machine gun and many other pioneering designs.  When he died, Browning was the holder of at least 128 patents in this area.  Many current firearms are based on his basic concepts and designs.  Browning’s BAR design was modified and used all the way through World War II, Korea and in the early days of the Vietnam conflict by United States forces as a light machine gun until it was replaced by later weapons.  Browning’s relatively lightweight BAR could be carried over the shoulder and fired either from the hip, the shoulder or while the shooter was prone, propping the weapon with a bipod stand.  It is thought that Barrow was probably given his first examples of the gun by someone else, after which he and the gang usually obtained them by stealing them from National Guard armories and hardware stores.

The gang also was known to use revolvers and semiautomatic pistols like the M1911, in addition to shotguns like the Remington Model 11.  The Model 11 was manufactured from 1906 to around 1947 in various calibers (12, 16 and 20 gauge).  It held four rounds and as one round was fired, another was loaded.  Bonnie Parker was sometimes pictured holding a Model 11, modified to shorten the buttstock.  Remington is a familiar name in the United States.  The Remington company is now over 200 years old, having been founded in 1816 by Eliphalet Remington in New York, as E. Remington and Sons.

The duo of Barrow and Parker had vowed never to let themselves be captured, and were able to elude authorities for months, but their luck finally ran out on May 23, 1934.  The facts of their deaths are fairly well known.  After investigators saw a pattern in the outlaws’ multi-state travel routine, and on a tip to the authorities, the duo was killed in an ambush by a group of officers  including Special Texas Rangers Frank Hamer and Maney Gault along with four other lawmen.

As to the weapons that the couple were carrying at the time, the reports vary somewhat.  An Associated Press newspaper report that day said, “In the wrecked car, officers found three army rifles, two sawed-off shotguns, a machine gun, a dozen pistols and large quantities of ammunition.”  Quoting Sheriff Henderson Jordan, another contemporary newspaper report said, “In the car, which bore an Arkansas license plate, we found a regular arsenal, including three machine guns; four .45 caliber pistols; two .38 caliber pistols, one .45 double-action pistol, two automatic shotguns and three bags of ammunition.”

The list of weapons usually looks something like this: several .45 Colt revolvers (M1911), three BARs (M1918), a .32 Colt automatic, a 20 gauge Remington Model 11 shotgun, a 10 gauge Winchester shotgun, a double action Colt revolver and a .38 Colt automatic.  Their cache also included several bags of rounds for the guns.  Representative images of four of the weapons are shown below. 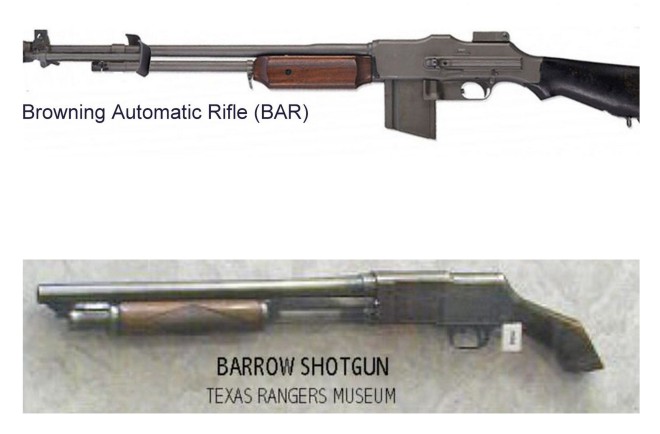 Should the pair have had time to react, with this potential firepower they might have been able to return fire that day in Louisiana, but instead in a matter of minutes, their short careers in crime came to a end.