James Riely Gordon was a practicing architect during what has been called the Golden Age of Texas Courthouses, the 1880s and 1890s.  By then, almost all of the 254 Texas counties now in existence had been established.  The Texas legislature allowed counties to issue bonds for courthouse construction and many counties did, leading to construction projects all over the state.

Gordon was one of scores of architects engaged in drawing up plans for these buildings.  He was born in Virginia in 1863, and his parents moved to San Antonio in 1874.  At the age of 16, he began working for the International and Great Northern Railroad.  A few years later he was engaged as an apprentice to architect W. K. Dodson of Waco, and then secured a job with the U. S. Department of the Treasury designing federal buildings across the country.  He was essentially self-educated in architecture and returned to Texas in the late 1880s.  His first known Texas courthouse design was for Bexar County, designed by Gordon and his business partner at the time, D. E. Laub.

A majority of Gordon’s designs are in the Romanesque Revival style.  The footprint of many of his buildings is in the shape of a cross, featuring a dome at the center.  Under the dome is an atrium intended to provide ventilation in the Texas breeze.  The Ellis County structure pictured above is a beautiful example of his work.

In a humorous aside, the origin of the small ornamental faces on the exterior of the Ellis County courthouse remains a mystery.  One of the more interesting explanations is that one of the project’s stone carvers named Harry Herley fell in love with a local girl named Mabel Frame whose parents ran the boarding house where Herley resided during construction.  Herley reportedly carved her sweet image into the first of the faces.  When his romantic overtures were not returned, Herley began carving more and more bizarre faces as the project went on.  Though there is no documentation whatsoever for this amusing account, it continues to be associated with the building. 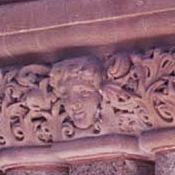 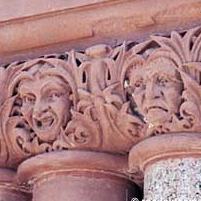 Below is a listing of Gordon’s Texas courthouses, many of which are still in daily use, even if no longer used for their initial purpose:

Gordon designed scores of other buildings including the State capitols of Montana and Arizona during his long career.  He was an honorary member of the Long Island Society of Architects and a former head of the Council of Registered Architects of New York.  Gordon was awarded the Congressional Medal for design in the Columbian Exposition of 1893 (the shortened name for the Chicago World’s Fair).  He was also actively involved in the preservation of city parks when he was president of the New York Society of Architects.  In 1937, he died as the result of a stroke at the age of 74 while residing in Pelham, New York.  Gordon had worked in the field of architecture for almost 60 years and at the time of his last illness, he was designing a building for the upcoming New York World’s Fair in 1939.