This famous ranch was founded by Charles Armand Schreiner, who was born in 1838 in Alsace-Lorraine, an area that lay between Germany and France.  He came to the still young United States of America with his parents and family in 1852, settling in Bexar County.  In an unexpected turn of events, both of his parents died shortly thereafter.  His father Gustav passed as the result of a rattlesnake bite within a year from their arrival, followed by his mother Charlotte’s death four years later.  His family was dispersed at that point, with his only sister getting married, one brother leaving for California to find gold and two other brothers remaining in San Antonio where they had found employment.

Charles worked as a cowboy for a while, then joined the Rangers while still a teenager and rose to the rank of Captain in the Kerr Mounted Rifles.  He would be referred to as Captain thereafter because of his service with the Rangers.  In 1857, Charles ventured into ranching with his brother in law, and the two built a ranch near Kerrville and also acquired and operated a small store at Camp Verde, the location of the U. S. Army’s experimental camel program.  He also applied for U. S. citizenship.  At the outset of the Civil War, Charles joined the Confederate Army where he served for the duration of the conflict.  Another brother, Aime, fought for the Union.  After the war, Charles returned to ranching and branched out into the lumber business, in particular the manufacture of shingles.  This led him to revive an interest in operating a general store.  Along with a partner, August Faltin, he opened his store in Kerrville on Christmas Eve of 1869 and it remained in business continuously for the next 137 years. 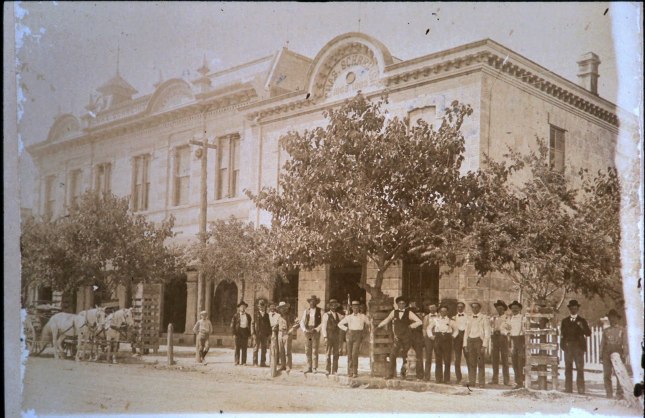 Schreiner earned a reputation for honesty and trustworthiness, also holding customer funds for safekeeping, which evolved into a banking business, Charles Schreiner Bank, in 1879.  He eventually acquired Faltin’s interest, after which he returned to ranching.  Recognizing the need for quality education, he also founded a school, Schreiner Institute.  It later became Schreiner College and Schreiner University in Kerrville, operating as a private institution and serving around 1,300 students.

in 1880, Schreiner acquired the Taylor-Clements Ranch along with its YO brand, a capital Y atop a sideways and slightly flattened O.  The YO Ranch became the headquarters for his cattle operation and the nearby Live Oak Ranch was the headquarters for his sheep operation.  Rail service arrived in Kerrville in 1887, greatly adding to the economic potential of the area and Schreiner’s three businesses in particular.  The interesting account of the life of the store was chronicled in 1969 by author J. Evetts Haley in his book “The Story of a Country Store.”

Schreiner’s first cattle herd on the ranch consisted mostly of Longhorns.  Herefords were added in 1880 and likely comprised the majority of the herd until around the 1940s when other breeds were introduced.  Although at its peak, it did not have the massive acreage of some of the West Texas or North Texas operations, the ranch was successful.  In 1919, the holdings amounted to around a half million acres in Kerr, Gillespie, Kimble, Edwards, Mason, Frio, Presidio and Menard Counties.  After Schreiner’s death in 1927, the ranch and other businesses passed on to members of his family.  In the 1950s, Charles Schreiner III began to build up the Longhorn herd, after the breed had become quite scarce over the years, recognizing the importance of the hardy cattle to the longevity of the ranch.

Along with the Longhorns, the ranch added quarter horse production, sheep, goats and exotic African animals.  50 years ago in 1966, Charles Schreiner III and other friends including cartoonist Ace Reid and Livestock Weekly publisher Stanley Frank conceived a plan to make a cattle drive from San Antonio to Dodge City, Kansas.  On June 26, 1966 they started from the parking lot of a San Antonio hotel, confining the cattle in portable pens.  Schreiner and around 100 other riders drove the herd of 100 Longhorns in open range by day, freighting them at night across fenced and urban areas.  Along the way, they touched many historic locations including Doan’s Crossing at the Red River.  At Quanah, members of the local sheriff’s posse simulated an Indian attack and there were other events along the way.  They reached their destination in Kansas on July 2, 1966.  A shorter but similar drive was held in 1976 when a herd was driven from San Antonio to the Texas Tech campus in Lubbock to commemorate the opening of the Ranching Heritage Center.  The famous ranch was featured in the Neiman Marcus Christmas catalog when in 1989 it advertised a trail drive to be held the following spring.  275 purchasers worked alongside the ranch hands for several days and the event was a great success.

The ranch has also offered outdoor awareness program.  Also, hunting and general tours of the facilities which may be arranged through its website.

Posted by Texoso on December 8, 2016 in biography, ranches, ranch families

5 responses to “YO Ranch”