Under the rule of Spain and later Mexico, there were a number of empressario grants made, including Austin’s Colony, Dewitt’s, DeLeon’s, Edwards’ and McMullen and McGloin.  These grants were primarily located in the southern portion of the area, inland from the gulf coast.  A similar empressario system was enacted by the Republic of Texas to encourage settlement in the northern part of the Republic.  One of these grants was to W. S. Peters and his associates and was signed by President Mirabeau B. Lamar in 1841.

Its original boundaries included the Red River to the north, starting at Big Mineral Creek going south about 60 miles to the boundary of Fannin County as it was constituted then, proceeding 22 miles west and extending due north to the Red River.  Settlers were to be of good moral character, and among other things, would have to agree not to sell intoxicating liquor, powder, lead, firearms or any other type of weapons to the Indian tribes.  All lands not settled by 1848 under the agreement were to revert to the Republic.

At the time the arrangement was made, the area was mostly inhabited by Indians, but the availability of water, grasslands and rich soil was expected to appeal to settlers.  The Fifth Congress of the Republic established the colony on February 4, 1841.  It took the name of Peters since his name was first in the list of organizers, 8 of whom were from Kentucky and 13 of whom were British citizens.

Married men were to receive 640 acres, single men 320 acres.  Each settler was to receive title to the land after cultivating at least 15 acres, having lived there for at least 3 years and having built a cabin and fencing.  The contractors were to receive 10 sections of land (6400 acres) for each 100 families and 100 single men brought in and settled.  A second contract in November of 1841 extended the initial boundaries southward another 40 miles and increased the required number of settlers to 800.  A third contract was signed by President Sam Houston in July 1842 giving the company a six month extension and the boundary was again slightly extended.  Ownership of the organizer had changed at various times during the length of the agreement.  A fourth contract in January 1843 added some ten million acres to the agreement.  It gave the organizers a 5 year extension to 1848.

Settlement was not initially rapid despite the efforts of the organizers.  By late 1843, only 25 families had settled.  By the summer of 1844 the total had only reached 381 families and 305 cabins, less than half of the goal of 800.  Texas became part of the United States in 1845.  The state constitutional convention wrote the Texas Constitution and also passed an ordinance declaring that Peters Colony had failed to meet its contractual agreements, leaving the settlers’ title to their land in doubt.

There is another chapter of the colony, not dealt with in detail here, involving the unpopular Peters Colony leadership of manager Henry Oliver Hedgcoxe in which the settlers protested against what they referred to as his autocratic policies, also accusing him of trying to lay claim to settlers land.  On July 15, 1852 a group of settlers met in Dallas.  The next day, an armed group of men representing the settlers took over the company offices, seized the company files and removed them to the Dallas County Courthouse.  Hedgcoxe fled the area, ending this phase of the incident, known as the Hedgcoxe War.  Hedgcoxe relocated to Austin where he died in 1860 and was interred in the historic Oakwood Cemetery.

In 1852, a successor entity by the name of the Texas Emigration and Land Co. (Peters Colony) was the subject of a Texas act declaring that the company relinquish its claim to the colony and submit a payment of $300 in return for certificates for 700 sections (448,000 acres) of land.  This act did not deal with the claims of all the settlers, as settlers after 1848 had no clear title to their land, so they in turn petitioned the state legislature.  A supplement to the 1852 act was passed in early 1853 that declared that surveys made between July 1, 1848 and February 10, 1852 would also be declared valid.

Once this legislation was passed effectively clearing up title for the original and later settlers, the number of residents rapidly increased.  Even though Peters Colony could be viewed as having been unsuccessful in many respects, by 1860 the area represented all or portions of some 18 counties and included 60,000 settlers.  That same area is now home to millions of people.  There are quite a few local schools, roads and other entities whose names are connected to Peters Colony.  The Denton County town named The Colony came into being in the late 1960s, but takes its name from Peters Colony.  Also the original town site is supposed to be located on or near the Peters Colony office referenced above in the Hedgcoxe matter.

The image below reflects a rough approximation of the first and fourth Peters Colony contracts. 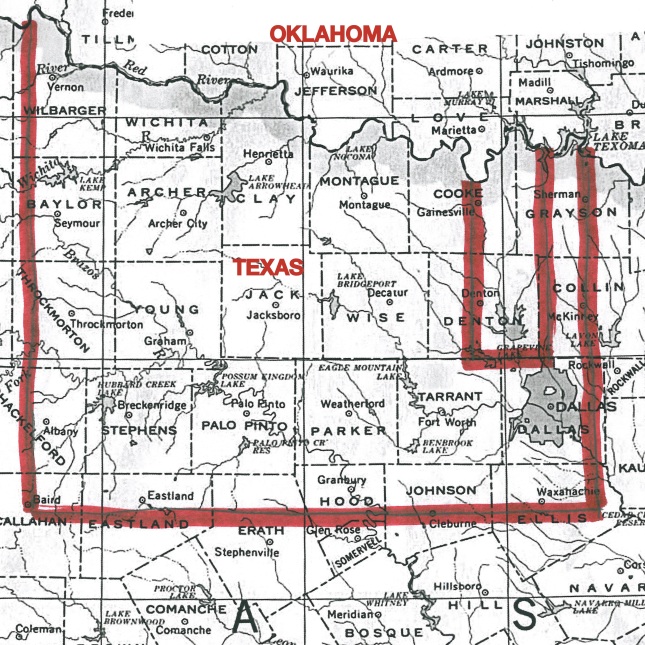 Posted by Texoso on December 15, 2016 in republic of texas