Clinton McKamy Winkler was a lawyer, judge and a member of the Texas Court of Appeals for many years.  He was born in North Carolina in 1821 to David Tate and Lavinia Cates Owen Winkler.  He moved with his family first to Indiana in 1835 for a few years before relocating to Texas in the early 1840s.  They settled in what is now Robertson County to be near other Winkler relatives.  The family was said to be descended from German immigrants, but his grandfather was born in North Carolina according to traditional genealogical sources.  McKamy was also an old family name and many of these McKamy relatives were also residents of North Carolina.

In the 1840s, Robertson County was somewhat still a frontier area.  As was common to the area, Clinton joined the local militia group that performed self defense of the area to protect the local settlers against Native American attacks.  Winkler was first a farmer.  He later was employed as Deputy County Clerk.  While in this position, he began to study law at night with a local attorney by the name of Charles H. Raymond and was admitted to the Texas bar in 1844.  After Texas was annexed into the United States, Winkler was elected to the state legislature in 1848.  One of his early duties was to present the petition to request that a new county be drawn up out of Robertson County.  The petition was accepted and Navarro County was formed, named for Juan Antonio Navarro, a Tejano who had supported the Texas Revolution.  Corsicana was selected as the county seat.

Winkler first married the former Louisa Bartlett, twice previously a widow, in 1848.  The couple was married about twelve years and had three daughters before Louisa died in 1861, months after the start of the Civil War.  Winkler had been one of the first 150 volunteers from Navarro County and served under John Bell Hood in the Confederate Army until the surrender at Appomattox.  Hood’s Brigade participated in many major battles including the Second Battle of Mansasas, Sharpsburg, Gettysburg, the Wilderness and supported the army of Northern Virginia.  Winkler entered the war as a captain, was promoted to major and ended the war as a lieutenant-colonel in 1864.  The Fourth Texas Infantry rolls listed 1,331 men.  Of this number 316 were killed in action, 140 died of disease and 625 were wounded one or more times.  Only nine of the original 150 men were still with the company at Appomattox. 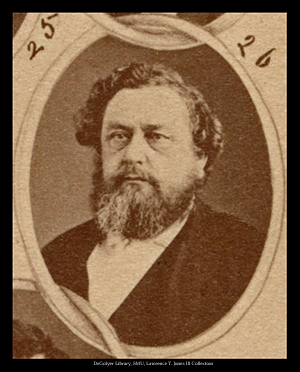 In January of 1864, he married Angela Virginia Smith and they returned to life in Corsicana.  The couple had six children, five of whom lived to adulthood.  In the post war days, Federal troops occupied and kept the peace in Corsicana.  Winkler was known as a peacemaker.  He returned to politics and was elected to the state legislature.

Winkler served as chairman of the State Democratic Executive Committee beginning in 1872.  A somewhat humorous incident occurred at the 1872 State Democratic Convention.  Corsicana was selected as the location and the Methodist Church, then new, was selected as the site.  Delegates came from all around.  At that time, Corsicana residents were in the habit of raising hogs, letting them run free and forage around the town.  At the Convention, a group of hogs found shade under the Methodist Church and enjoyed the soft mud there.  The Convention was interrupted from time to time by the noisy squeals of the animals.  In addition, a number of delegates came away with infestations of fleas from the hogs.  Thereafter, the event became known as the “hog convention” or the “flea convention.”

From 1876 to 1882, the year of his death, Winkler served on the Court of Appeals.  He died on May 13, 1882 and was interred at Oakwood Cemetery in Corsicana along side his first wife Louisa.  His wife Angela survived him until her death in 1911 and she is interred in El Paso.

Both Wink, Texas and Winkler County in west Texas are named for him. Winkler County was formed on February 26, 1887 out of what was then Tom Green County.  Kermit is the county seat.  The town of Wink grew up when oil was discovered nearby.  It too was originally called Winkler, but the name was shortened to Wink at the request of the postal service when it came time to establish a post office.