The Fort Worth Gazette issue of August 8, 1889 carried a small paragraph that read as follows under the headline in all caps that read “TO OUTDO THE FRENCHMEN.”  The paragraph read, “A Washington architect, anticipating the great world’s fair to be held here in 1892 in honor of the 400th anniversary of the discovery of America, and wishing to lay the Frenchman who conceived and built the Eiffel tower completely in the shade, has submitted plans for a tower to astonish the thousands who will gather here at the great exposition.  It is to be 1500 [feet] high or 500 more feet more than the wonderful tower in Paris.”

We don’t believe that the monument that the writer mentioned was ever built.  It could not have been a reference to the Washington Monument, because the construction of the beautiful obelisk had begun in the 1840s, not quite fifty years after the death of President George Washington, and had been completed just the year before, in 1888.  We commonly pronounce Eiffel like “EYE-full” but it is named for the French architect, Gustav Eiffel, pronounced “uh-FELL.”

August Gustave Eiffel (1832-1923) was an experienced civil engineer and designer of bridges and other structures, including the framework that supports the Statue of Liberty and the Panama Canal.  The now famous French tower topped out at a previously unheard of 984 feet, when compared with well known structures such as the cathedral in Cologne at 511 feet, the Great Pyramid in Egypt at 480 feet, the dome of St. Peter’s Cathedral in London at 433 feet and the Washington Monument at 500 feet.  It was the tallest structure in the world for several decades until the completion of New York City’s Chrysler Building surpassed it in 1930, topping out at just under 1,050 feet.  Eiffel’s creation opened May 6, 1889 in time for the Paris World Fair.  The Tower received a mixed reception, as some loved it while others hated it.  One critic, author Guy de Maupassant, was known to have made a practice of dining in an Eiffel Tower restaurant because it was the only place in Paris where he would not have to see what he referred to as the “giant and disgraceful skeleton.”  Gradually, though, the Tower has become a beloved and key part of the Parisian landscape as well as a tourist attraction.

Eiffel himself went on to other pursuits as his civil engineering career waned.  He also is known for his work in aerodynamics, contributing valuable findings from his research.  He was known to conduct some aerodynamic experiments on the premises of the Tower.  In other locations, he built a wind tunnel and and a weather station and recorded his weather observations. 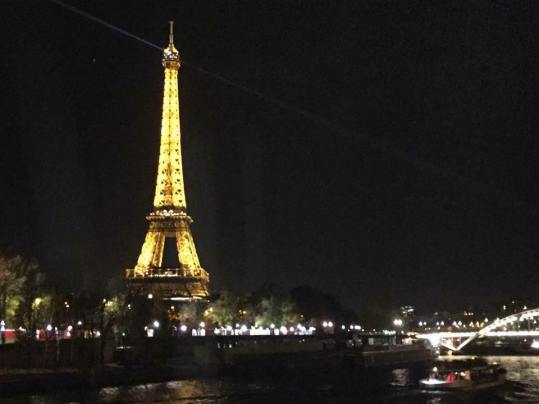 Well then, how does this discussion transition from Paris, France to Paris, Texas?  Around 1990, a couple named Herb and Dorothy Gifford of Medford, Oregon donated a forty-one foot tall wooden version of the French landmark to Paris, Texas because they felt that “every town named Paris should have an Eiffel Tower.”  Herb had worked at a lumber mill in Medford until his retirement in 1982 and had previously enjoyed building wooden domes and gazebos as a hobby.  He and Dorothy said that Herb had also given away at least about fifteen hundred pairs of stilts over the years.  Their son had sent them a postcard from Paris, France that bore the image of the Eiffel Tower which got Herb to thinking.  Herb felt that since they were not likely to be able to travel to France, he decided to bring a little of France to Medford, Oregon.

It took Herb about two years to build the wooden replica out of local Douglas fir and install it near his home.  It was a popular attraction in Medford and neighborhood kids enjoyed climbing on it.  They also offered it to the city of Medford which politely declined.  Later on, one of their sons had moved to Midland, Texas and told his father about a town in Texas also named Paris that probably needed an Eiffel Tower.  So, Herb contacted local authorities in Paris, Lamar County, Texas who worked out the details to bring the wooden tower to Paris, Texas and install it in a park.  The tower was disassembled in Oregon, shipped to Texas and reassembled and dedicated in the summer of 1990 on the campus of Paris Junior College.  Despite the fact that it was sturdily built, the tower was blown over and damaged on May 21, 1991 during a spring storm that included high winds and also a possible tornado.

However, the attraction of the wooden tower motivated the people of Paris to conceive a more substantial structure, and contacted contractors Babcock and Wilcox to build a metal tower.  Local boilermakers union volunteers donated many hours to build the new tower and it was completed in the summer of 1993.  A few years later, it was topped off with a steel cowboy hat welded together by two gentlemen named Daon Hall and Don Riddle.  The hat is four and a half feet tall with a ten foot wide brim and sports a steel feather that is two feet tall.  The tower itself is sixty-five feet tall. For a very short time, Paris, Texas could brag that it was the second largest town named Paris and that it had the second tallest Eiffel Tower.  Since this tower was completed, there have been more Eiffel Tower replicas, including the much larger one in Las Vegas, Nevada, 540 feet tall, but the one in Paris, Texas will always be a favorite for Texans. 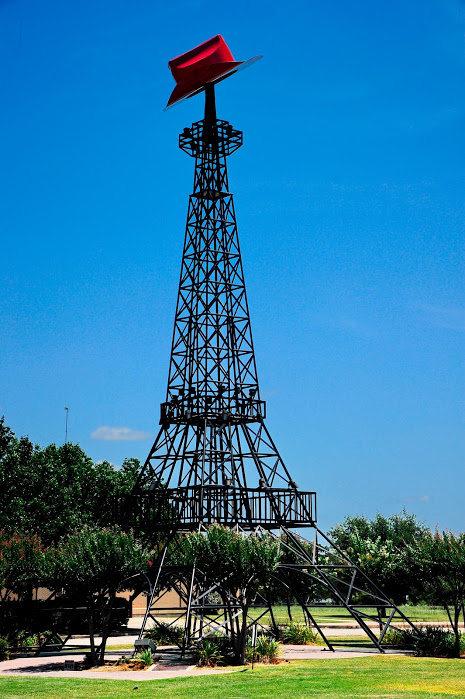