Belle Starr, the famous “female outlaw” was born Myra Maybelle Shirley on February  5, 1848 to John and Elizabeth Shirley in rural Missouri near the town of Carthage.  It was a time when bandits, either male or female, were celebrated in some ways.  Her family lived on a farm.  Reportedly, they were also slave owners in a time when strong attitudes for or against slavery divided residents especially in so-called border states.  Her family later sold their rural property and moved into Carthage where they ran the inn and several other businesses.  The civil war came and a brother joined the Confederate army and more specifically the controversial outfit known as Quantrill’s Raiders.  Her brother Bud Shirley was killed in Missouri in a skirmish between Union and Confederate troops.  The economy had generally deteriorated in Missouri because of the war and the Shirleys packed up and moved to near Scyene, Texas, at the time located southeast of Dallas, around 1864.

She first married Jim Reed, known to be a former Quantrill Raider.  Some accounts say that she was previously married to Thomas “Cole” Younger and that he was the father of her daughter Rosie Lee “Pearl” Reed, but this is disputed and there is said to be no evidence to support that Younger was Pearl’s father.  The young family lived with Belle’s parents for a while before setting up their own home elsewhere.

For a while Reed is thought to have worked for others before taking up with Tom Starr, a Cherokee, who is believed to have operated as an outlaw in and out of the Indian Territory.  Perhaps to avoid prosecution for some of the activities of Starr and his associates, the Reeds moved to California around 1869.  They remained there for at least a couple of years during which time their son James Edward Reed was born.  How Reed found employment there was unknown, but at least one account has him being suspected of passing counterfeit money and also being wanted for murder.  Regardless, the family returned to Texas some time afterward.

Back in Texas, Reed is thought to have continued his criminal activities including cattle theft and possibly murder and the couple lived alternately in the Scyene area and in Indian Territory.  Some accounts have Belle participating in some of Reed’s activities while others have only her raising her family.  Eventually she returned to live with the Shirleys.  In the mid 1870s, Reed was shot and killed in Paris, Texas by John T. Morris, a former associate of his, who had been deputized to capture him.

Belle’s father died in 1876, after which her mother sold their farm and moved into Dallas.  Some accounts have Belle living with her for a time and also briefly being married to Bruce Younger, a nephew of Cole Younger.  However, in 1880, Belle is known to have married Sam Starr, a son of Jim Reed’s former associate Tom Starr.  In 1882, Belle and Sam were accused of stealing horses from neighbors and brought to trial in Judge Isaac Parker’s court in Arkansas.  The pair was convicted and served less than a year in a federal prison in Detroit, Michigan.  After returning to the south, she and Sam Starr appear to have parted ways.  Starr was later killed in a shootout with a tribal policeman. Belle was associated with several different men after that, including one John Middleton Blueford “Blue” Duck and an adopted son of Tom Starr named Billy July, a/k/a Jim July and Jim Starr.  During the latter association with July, as we will call him, both were accused of stealing horses.  While July was en route to a trial in Arkansas, Belle was staying with friends when she was killed by a shotgun blast on February 3, 1889.  She was two days shy of her fortieth birthday.  She was later buried in a non-cemetery grave in Porum, near Muskogee, Oklahoma.  One Edgar Watson, briefly a tenant of hers, was tried and acquitted for the murder.  Many accounts focus on Watson as her assailant, stemming from an earlier disagreement.  Watson had rented her farm, but she refunded his money and reneged on the rental arrangement when she found out that he was a wanted man.  Her arrangement with the tribe had included a provision that she would not be associated with criminals, in order to keep her land, leading her to decline to rent to Watson and presumably giving Watson motive to kill her.  However, there was little physical evidence and no one else was ever charged with her murder.  Both July and Watson were killed soon thereafter in unrelated incidents. 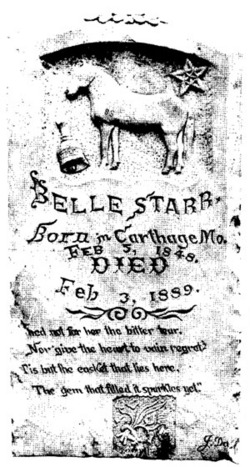 Newspaper accounts in the 1800s refer to her with nicknames such as The Bandit Queen, Queen of Outlaws and/or a Female Jesse James.  Although most of her adult life, she was associated with outlaws and alleged from time to time to have participated in robberies, her main crimes appear to have been stealing horses.  On her granite tombstone is engraved a horse, a bell and a star, the dates of her birth and death and an inscription that reads as follows, “”Shed not for her the bitter tear, nor give the heart to vain regret.  Tis but the casket that lies here – the gem that filled it sparkles yet.”

Posted by Texoso on April 4, 2019 in biography, outlaws and crimes, texas women