The Hoodoo War was the common name for the Mason County War, which took place in the middle 1870s in the area and arose over the killing and rustling of cattle.  This was typified by attacks from vigilantes wearing masks to conceal their identities and to generate terror.  These vigilantes essentially took the law into their own hands in an effort to defend against the alleged perpetrators. 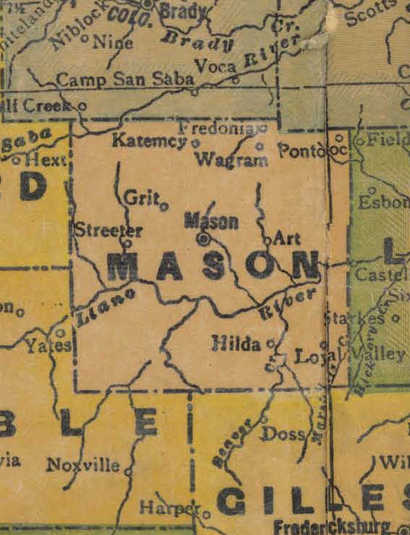 Fort Mason had been established in 1851 as a frontier outpost to aid settlers against Indian attacks.  A number of settlers were attracted to the area because of the fort, which remained in service until it was abandoned around 1868.  As was sometimes experienced in other parts of Texas, the post Civil War years were sometimes characterized by an increase in crime.  Whereas, the federal troops had previously aided in keeping the peace, after their departure it took some time before law enforcement increased in response to crime.

Though the Mason County conflict was officially between cattle owners and cattle rustlers, there was another strong theme that involved ethnic differences.  Mason County had become home to a number of German immigrants and there was a general air of suspicion between them and the other Anglo settlers.  Some of the Texas residents of German heritage had also tended to be Union sympathisers, or “unionists,” during the Civil War and some of the old Civil War hostility carried over after the war ended.  Though there may have been incidents where German vigilantes attacked Anglos, the violence seems to have generally been directed by Anglos against those of German heritage.

One of the seminal events occurred in February of 1875, when a group of about forty masked individuals (thought to be from the Anglo side) broke into the county jail to apprehend suspected rustlers in Mason, easily overpowering the local law officers. Nine suspected rustlers of the Backus or Baccus gang had previously been arrested by newly elected Sheriff John Clark, but four had already escaped.  The remaining five suspected cattle thieves were dragged out of the jail and hung, though two of the five somehow survived.  The hangings were investigated, including a pursuit by Texas Ranger Daniel W. Roberts, but no charges were brought.

The February hangings touched off other incidents of violence including the alleged murder of an Anglo rancher named Tim Williamson in May of 1875.  Williamson had been wanted for cattle rustling, specifically the suspected theft of a yearling, while Williamson had been in the employ of a German rancher named Lehmberg.  Williamson made bail for the arrest.  Sheriff Clark was said to have come to the home of Williamson in connection with an unpaid tax debt.  In Williamson’s absence, Clark was accused of somehow abusing Williamson’s wife (the accounts are vague on this point), causing bad blood between Williamson and the law.  Williamson was later arrested and happened to be in the custody of a deputy named John Worley, in an incident in which the prisoner Williamson was shot and killed by a group of about a dozen riders, unidentifiable because they had blackened faces.  The deputy was able to escape.  In response to the killing of Williamson, a friend of, or an adopted son of, Williamson named Scott Cooley retaliated by gathering his own group of vigilantes, shooting and scalping deputy Worley several weeks later in August, 1875.  After killing Worley, Cooley and some of his associates continued to commit acts of violence in the area.

A local judge had appealed to Governor Coke in Austin many months earlier, requesting that troops (Texas Rangers) be sent to the area to assist the cattle ranchers in dealing with the rustling problem.  After the Worley killing, another appeal was made to Austin for Texas Ranger support.  There followed more violent incidents until a company of Rangers headed up by Major John B. Jones arrived.  Cooley (a former Ranger himself) eluded capture but, along with some of his cohorts, he continued to prey on mostly German ranches.  Cooley was eventually arrested in Burnet but was later freed by friends reportedly from Lampasas County.  In the months that followed there was more violence back and forth, with numerous killings at the hands of vigilante groups.

Cooley was never again captured, and some accounts say that his former experience as a Ranger caused some Rangers under Major Jones’ command to be unenthusiastic about finding him.  However, Cooley died several months later of “brain fever.”  Another account said he had died while riding out of Fredericksburg after a night of eating and heavy whiskey drinking.  The latter account speculated that Cooley, under the influence, fell from his horse, suffered a head injury and never recovered.

To the best of our knowledge, no one was ever tried in Mason for any of the various attacks, though some individuals were known to have been arrested and tried in other jurisdictions.  Some say that the outlaw Johnny Ringo (better known for his activities in Tombstone, Arizona) got his start in Mason County and that he played some part in the rustling and violence in the Mason County events.  He is also sometimes referred to as Johnny Ringgold.  There is a bit of confusion about his identity, with some stories saying that the last name of Ringgold came from a mistake in a newspaper account and that it was really Ringo, while other accounts actually attribute the Mason County actions to someone with the actual last name of Ringgold.  However, most accounts we have found favor Ringo’s participation in the Hoodoo War.  Ringo was known to have taken the side of Ike Clanton and his associates against Wyatt Earp and died in Arizona at the age of thirty-two in 1882.  His death was due to a single gunshot wound to the head, either by suicide or a murder that was made to look like suicide.

Finally, after over a year, the Mason County incidents died down and the feuding appears to have worn itself out.  Just over a dozen people had died in the months of Mason County violence, though many more were injured.  In January of 1877, a fire suspected to be arson burned down the court house in Mason, and along with it, many of the legal documents pertaining to the conflict.