In an article under the column “Domestic Intelligence” the Galveston Daily News reported on March 3, 1871 that the Texas Pacific Railway when it was granted a federal charter to operate.  The company was authorized to build a railroad via the most direct and eligible route along the 32nd Parallel from Marshall, Texas to El Paso and on to San Diego, California.  With the railroad grant came a federal land grant of twenty sections of land per mile in California and Texas and forty sections of land in the territories of New Mexico and Arizona.  Why Marshall, Texas?  A Louisiana company, New Oleans, Baton Rouge and Vicksburg Railway Company already had been granted a charter to connect to the line at Marshall.

The federal charter was recognized in 1871 by the State of Texas.  The new railroad company was also authorized to acquire a company that had begun as Texas Western Railroad Company and later changed its name to the Southern Pacific Railroad Company, a Texas company and not to be confused with the large national railroad out California with the same name.  In November of 1871, the Austin American-Statesman reported that the United States Land Office in Los Angelos [sic] had received a map from the Secretary of the Interior showing a line from San Diego to Fort Yuma in the Arizona Territory as the proposed route.

Marshall O. Roberts served as its first president for about a year.  He was then succeeded as president by Thomas A. Scott, who was mentioned in various newspaper articles.  General Grenville M. Dodge was appointed Chief Engineer.  Dodge is a name that might be familiar to some Texans as having been the founder of Iowa Park.  He had already served many years doing railroad work in the state.  Nationally, his railroad experience included heading up the Union Pacific part of the Transcontinental Railroad when it was completed at Promontory Point, Utah Territory in May of 1869.  Under Dodge, the 125 mile stretch from Longview to Dallas was completed in July of 1873.  Work had begun in California heading east, but it was halted due to a national economic crisis later that year.  A line from Eagle Ford (near Dallas) was completed to Fort Worth in the summer of 1876, but work faltered on the West Coast portion of the line.

Railroad magnate Jay Gould put together a syndicate to acquire control of the company in 1879, retaining Dodge as engineer.  Construction commenced on the line west from Fort Worth in 1880 and it reached Sierra Blanca near El Paso in 1881.  Construction was also completed from Sherman to Fort Worth that same year, giving the railroad just over 1,000 miles of track, with Gould’s financial backing. 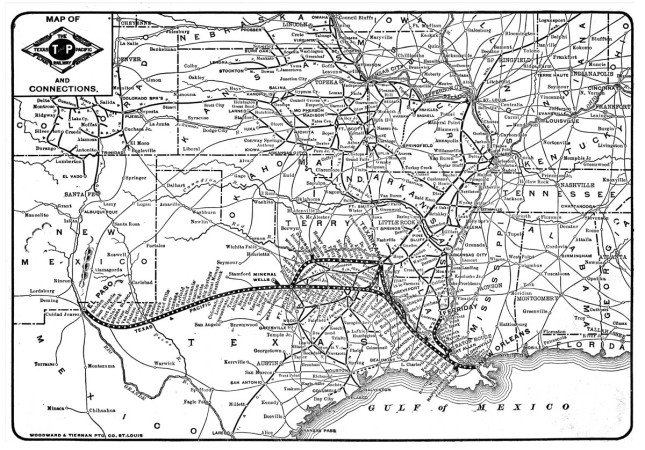 Backtracking just a bit, Jason “Jay” Gould had been born in 1836 into a farming family in New York but reportedly his ambition led him into businesses.  Back then, he was called a robber baron, which is now something of an archaic derogatory term, but it referred to someone obsessed with wealth who would do anything to obtain and accumulate it.  Gould had begun to invest in small railroads when he was in his 20s.  He had also successfully won control of the Erie Railroad from financier Cornelius Vanderbilt.  Gould became adept in timing when to get into and out of the stock market.  Even though he lost money from time to time in his ventures, the wealth he accumulated allowed him to move when others were unwilling or unable to and and expand his railroad interests.   In his home state, Gould was also associated with a political group known as the Tammany Hall Gang, known for its political power in New York City.  Headed up by William Magear “Boss” Tweed, its members reportedly controlled elections, allowing it to grant financial and political favors with its power and influence, until Tweed was brought down in 1871.  Along with some others but not including Gould, Tweed was convicted of corruption but fled the United States briefly before being returned by authorities in Spain to serve his prison sentence.  Tweed went on to die in prison in 1878.

Gould had gone on to other ventures and was able to obtain control of Union Pacific during a national economic downturn in 1873.  To Union Pacific, he added several more rail lines including the Missouri Pacific Railroad and the Texas and Pacific in 1879.  Southern Pacific, the large rail line out of California and not a Gould entity, had already reached Yuma, Arizona and laid rails to the east all the way to El Paso, along the route that was to have been reserved for Texas and Pacific leading to litigation between the two companies.  The disputes were settled by something known as the “Gould-Huntington Agreement” in 1881.  Huntington referred to Collis P. Huntington, Gould’s counterpart at Southern Pacific.

Huntington had prominently figured into another Texas railroad story, though not directly involving the Texas and Pacific, since the location of the subject is still currently several hours drive south from the Texas and Pacific track.  Less than ten miles from the point where the Pecos River joins the Rio Grande near Langtry, Texas, there is a gorge that used to be problematic for the rail lines.  Originally when the tracks were completed in the 1880s, trains had to take a circuitous route to cross the Pecos at a different point, avoiding the gorge.  Then a Southern Pacific engineer came up with the idea of constructing a viaduct over the gorge.  Southern Pacific set about constructing the bridge although it was actually built by a separate company owned entirely by Huntington.  When it was completed in 1892, the Pecos High Bridge stood 321 feet above the surface of the river and was 2,180 feet long.  Huntington and his other Southern Pacific railroad executives decided to charge other carriers a toll, a fifty cent surcharge on fares, though this was not without precedent in other states.  A Seguin, Texas newspaper account reported that Huntington actually stopped traffic on the bridge for two months after other railroad lines resisted paying the toll, until the newly formed Texas Railroad Commission was successful in ruling the toll to be illegal.  The original bridge served was one of the longest and tallest railroad bridges of its time and served until 1944 when it was replaced by the current structure.  Though we have not been able to locate a film clip, the 1892 structure was reportedly also featured in a melodrama in which a train chases a car across the bridge.

From time to time, there was litigation mentioned in the history of the Texas and Pacific Railroad.  The railroad company would have been entitled to over 12,000,000 acres of land once the  line was completed through Texas, but it only received just over 5,000,000 because the western portion was not completed within the time specified in the charter.  The suits were finally settled with the State receiving back over 250,000 of the above acreage that the railroad formerly owned.  At its peak, the Texas and Pacific operated over 1,000 miles of track including the short lines it either built or acquired.

Gould died in 1892, and it is not immediately clear what happened to the Gould family holdings after they passed to his son George.  Texas and Pacific had also declared bankruptcy in 1888, though the railroads continued to operate.  Out of the Texas and Pacific bankruptcy, the a new company called the Texas Pacific Land Trust was formed to make an orderly disposition of the land holdings of the railroad.  The Texas Pacific Land Trust is actually still in business today and is a publicly owned company.  There were two other noteworthy transactions that were consummated after Gould’s death.  The Union Pacific Railroad acquired control of Missouri Pacific.  This merger was approved in 1892 but consummated a few years later.  The lines all basically survived the Great Depression in the 1930s.  Then in 1976, the Texas and Pacific was merged into the Missouri Pacific, along with the Chicago & Eastern Illinois Railroad, thus ending the separate identity of the Texas and Pacific Railroad after just over one hundred years of existence.

One response to “Texas and Pacific Railway”