Edna Browning Kahly was born on January 22, 1886 to Maurice (or Morris) and Minnie Nell Jones Kahly in Milwaukee, Wisconsin.  Nothing is easily found about her father, but by 1900, Minnie Nell, her mother, Edna and her sister were living with Minnie’s mother in Milwaukee.  Around 1903 Edna was sent to Texas to live with relatives in Fort Worth and about three years later in 1906, she married Samuel William Gladney.  Sam was born in 1877 in Commanche County to Thomas Lacy and Joyce Cathron Bowdon Gladney in 1882.  Tom was a rancher there in West Texas.  By 1900, Sam was 22 and living with the family in Gainesville, Cooke County, Texas.

Sam was in the flour milling business and first bought a flour mill in Wolfe City, Texas and eventually another one in Sherman, Grayson County, where Sam sold milled wheat flour under the now-familiar brand name of Gladiola Flour.  In 1921, Sam sold out to Fant Milling Company and the couple moved to Fort Worth.  The explanation for the sale was that Sam’s business had run up large losses and debts due to wheat speculation, a common industry practice designed to insure that the mill would always have an adequate supply of product to mill.  This caused Sam to be forced to sell the mill and he reportedly worked for years to pay off the debts.  The Gladiola brand seems to have since disappeared, but continued to be marketed at least up through the 1990s by its successor owners.

Perhaps growing out of her own experience as the child of a single mother, Edna had shown a burden early on for underprivileged children and while living in Sherman had worked to improve the county poor farm.  She also established a free day care facility for children of Sherman workers and financed it from her own funds.

Once the couple to Fort Worth, Sam continued to work to pay off his debts from the flour mill and Edna began to work for the Texas Children’s Home and Aid Society, which had been run for many years by Rev. Isaac Zachary Taylor Morris, a Civil War veteran and an ordained Methodist minister.  Morris had died in 1914 and his last wish had been that his wife Isabella would be allowed to succeed him as superintendent, which she was allowed to do.  During his sixteen years as superintendent, Morris had found homes for over 1,000 orphaned children.  Edna began to work for the Home and Aid Society and after Isabella Morris’ death in 1924, was named as superintendent of the organization in 1927.

Sam died of a heart attack in 1935 and Edna continued to devote her energy to running the Home.  In addition, she increased her role as an activist and advocate for orphaned children.  She worked to influence the Texas legislature to have the word “illegitimate” left off birth certificates.  The well known expression “There are no illegitimate children, only illegitimate parents.” is attributed to her.  Gladney lobbied for legislation to give adopted children the same inheritance rights as other children.  Her work was successful and the State of Texas instituted the policy of issuing second birth certificates in the names of adoptive parents.  Edna continued to work at the Home until her retirement in 1960.

In 1941, the film “Blossoms in the Dust” was released, directed by Mervyn LeRoy.  Loosely based on Edna’s life, the screenplay was written by Anita Loos, perhaps the first female screenwriter to be widely employed in Hollywood.  Loos also wrote the screenplay for the comedy “Gentlemen Prefer Blondes,” among others,  “Blossoms” starred Greer Garson and Walter Pidgeon.  Though it varies from some of the actual facts as we now know them, it tells the compelling story of Edna’s life of advocacy for orphaned children.  Along with “Goodbye Mr. Chips,” released in 1939, it is considered one of the springboards for Garson’s long and successful career.  It was MGM’s most successful film of the year.  The film was also a critical success, winning an Oscar for Best Art Direction and being nominated for three more awards, including Best Picture and Best Actress. 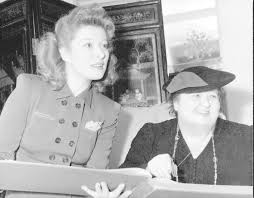 The film helped Gladney’s reputation spread throughout the country, and Garson and Gladney are said to have become close friends.  In 1948, the organization was renamed the Edna Gladney Home.  In 1957, Gladney received an honorary doctorate from Texas Christian University, which she had attended as an undergraduate.  She retired in 1960 due to health issues and died on October 2, 1961.  Edna is interred in Fort Worth’s Rose Hill Cemetery with her husband Sam.