Joan Robinson HIll was thirty-eight years old at the time of her death on March 19, 1969. Her husband, Dr. John Robert Hill, was accused of her death. He was murdered by a masked assailant in 1972.

END_OF_DOCUMENT_TOKEN_TO_BE_REPLACED

Internet Movie Database (www.imdb.com) lists the origin of the 1976 film “The Outlaw Josey Wales” to be a screenplay by Phillip Kaufman and Sonia Chernus which was in turn based on a fictional book believed to have been written by Asa Earl Carter under the pen name Forrest Carter. Carter’s book was first published in 1973 as “The Rebel Outlaw: Josey Wales,” republished two years later as “Gone to Texas” and published once more under the name “Josey Wales.” In the film the time period of which is set during the Civil War years, the character Wales’ family is killed and his home is burned by Union irregular troops. Seeking revenge, Wales aligns himself with a Confederate irregular group (Quantrill’s Raiders). After the Confederate surrender and the end of the war, the character Wales continues to seek revenge on those individuals who were responsible. The story continues with Wales eventually finding peace and a relationship with a female rancher, presumably escaping his violent past and living out his days.

END_OF_DOCUMENT_TOKEN_TO_BE_REPLACED

On the morning of October 26, 1943, Littlefield, Lamb County, Texas awoke to learn of the brutal murders of residents Dr. Roy Elwin and Mrs. Mae Franks Hunt.  Dr. Hunt had been killed by a gunshot at close range and Mae had been killed by at least one blow to the head from an object not found at the scene.  Their bodies were found by the couple’s five year old daughter.  The couple was buried a few days later following their funeral at Littlefield’s First Methodist Church, attended by an overflow crowd.

END_OF_DOCUMENT_TOKEN_TO_BE_REPLACED 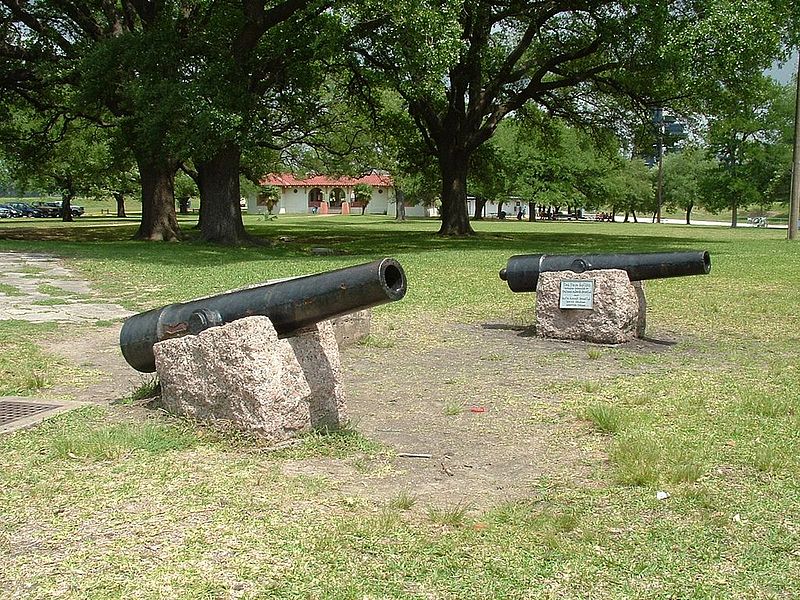 The “Twin Sisters” refers to two field pieces (artillery pieces) donated by ladies of Cincinnati, Ohio to the cause of the Texas Revolution.  According to an article in the Austin American-Statesman from 1874, they were two identical six pound rifle cannon that were built by a Mr. Tatum at a foundry in Cincinnati and shipped by riverboat to Texas.  They were delivered in person by Mr. Tatum himself in time to be used by General Sam Houston in the Battle of San Jacinto.  Following the Revolution they became prized relics and were known to have been fired at ceremonial occasions including the fifth anniversary of the Battle of San Jacinto and the inauguration of Gen. Houston as President of the Republic of Texas.

END_OF_DOCUMENT_TOKEN_TO_BE_REPLACED

A couple, Jimmy Hollis and Mary Larey, had been on a date after which they had parked on the last road of a subdivision in Texarkana the night of February 22, 1946.  At the time, Hollis was 25 and Larey was 19.  After a double date to a movie, they had only been parked for about ten minutes when someone walked up to Hollis’ side of the car and shined a flashlight in his eyes.  The man with the flashlight ordered the couple to exit the car.  Hollis recalled that the man was armed with a gun.  The man then demanded that Hollis remove his trousers.  Hollis had initially resisted but complied, only to be struck hard in the head either with the gun or some other object.  Hollis suffered a fractured skull in the attack.  Thinking it was probably a robbery, Larey was scared but pulled Hollis’ billfold out of his trousers to show the man that Hollis had no money.  The man then ordered Larey to open her purse.  She replied that she didn’t have one and she was knocked to the ground by the assailant after being struck with an object.  The man then ordered Larey to get up and run, which she did.  The man quickly caught her and bewildered Larey by asking her why she was running.  Larey was again knocked to the ground and this time was sexually assaulted.  After the attack, the assailant disappeared and Larey was allowed to escape, managing to get to her feet and run to a nearby house.