Hilory Bedford was born in 1840 in Kentucky.  He emigrated to Texas and was a Civil War veteran, having served in Troop A of the 19th Regiment of the Texas Cavalry.  Around the end of the war, he married the former Francis Elizabeth Browder.  In addition to their son Benjamin, the couple had at least three more children.  Hilory died in 1927 and is buried in Benjamin Cemetery along with his wife, two of his brothers, Francis Elizabeth and several others in the family. Hilory Bedford was the head of the Wichita and Brazos Stock Company, a cattle company he founded and operated with other family members.  Bedford is the author of the book “Texas Indian Troubles” first published in 1905 and still widely available.

The location of the town was chosen because it was situated directly between the Wichita and Brazos rivers.  Bedford divided a section of land and sold home sites to people interested in settling there.  In August 1884, lumber was hauled from Wichita Falls to the location to build the first 12 houses.  The county was organized one year later and Benjamin was named its county seat.  It was an obvious choice, since Benjamin was the only town in the county at that time.  A post office was opened there in 1886 and Bedford was the first postmaster. The first settlers decided that the town would be “dry” and the sale of liquor was prohibited, but this ordinance was repealed in 1890.

The Kansas City, Mexico and Orient Railroad arrived around 1900 from the north.  Eventually the rail line became part of the Santa Fe Railroad.  In the early days, it was the major means of transporting agricultural products like cattle, wheat and maize to market from the area.  Benjamin’s largest population was in the 1930s when it reached about 700 but since then, it has hovered around 500.  Its first county court house was built in 1887 but it was replaced by the current two story limestone structure in 1935.  Oil was eventually discovered but since its founding, Benjamin’s residents have always primarily relied on ranching and farming for their livelihood. 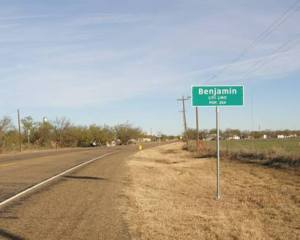