Gene Autry was born on September 29, 1907 in Tioga, Texas in Grayson County.  There is some sentiment for him having been born in a neighboring county, since Dr. Eugene Ledbetter, who delivered Autry, gave nearby Cooke County as where Autry was born.   Autry’s biography lists Tioga as his birthplace.

His full name was Orvon Grover Autry and Gene was his nickname in honor of Dr. Ledbetter.  Autry’s father Delbert was a rancher in the area and Gene grew up living the simple life of a North Texas ranching family.  Later, after his mother died, the family relocated to Oklahoma.  After leaving school, he worked as a telegraph operator for the St. Louis-San Francisco Railroad and performed at dances singing and playing guitar on the weekends.  Autry’s entertainment career began with a chance meeting in 1926 with humorist Will Rogers, who encouraged him to pursue and develop a singing career.

Autry worked until he could accumulate enough money to go to New York where he auditioned for Victor (later RCA Victor) Records in 1928.  He was initially turned down, so he returned to the southwest and began singing on radio station KVOO in Tulsa, Oklahoma, billed as “Oklahoma’s Singing Cowboy.”  The following year, he signed a recording contract with Columbia and began working on a radio show called “National Barn Dance” for the next four years.  During this period, he recorded numerous songs including his Christmas standards: “Santa Claus Is Coming to Town,” “Here Comes Santa Claus,” “Frosty the Snowman” and “Rudolph The Red-Nosed Reindeer.”  In all, Autry recorded 640 songs, about 300 of which he either wrote or co-wrote.

His film career began in 1934 with Gene being cast as a singing cowboy in the film “In Old Santa Fe.” His career was suspended during World War II while he served in the United States Army Air Corps.  After the war, he worked for Republic Pictures Corp and later Columbia Pictures before forming his own production company in 1951.  His last film, “Last of the Pony Express Riders” was completed in 1953.  He appeared in 93 films, all of which were in the western genre.  In addition from 1950-1955 he appeared in 91 episodes of “The Gene Autry Show.”

His military service began with his enlistment in 1942.  He was inducted as a Tech Sergeant.  Autry already held a private pilot’s license and endeavored to become a Flight Officer.  He entered basic training at Santa Ana AFB in Costa Mesa, California.  After transfers to Luke Field in Glendale, Arizona, Thunderbird Field, also in Arizona and Phoenix, he was accepted for flight training at Dallas Love Field.  He successfully completed his training and was sworn in as a fight officer in June, 1944 at Love Field.

Following his promotion, he was assigned to the 91st Ferrying Squadron of the 555th Army Air Base Unit, Air Transport Command and served with this outfit from July, 1842 to October 1945.  He flew cargo missions in various aircraft: AT-6, AT-7 AT-11, C-104 and C-109, mostly in Asia.  At the end of the war, he transferred to Special Services and took a USO troupe to the South Pacific.  Autry was honorably discharged in 1946 and received the American Campaign Medal, the Asiatic-Pacific Campaign Medal and the World War II Victory Medal. 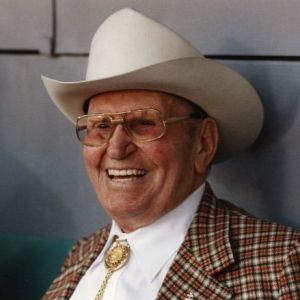