The 1935 election of James V. Allred as governor of Texas marked a turning point for the Texas Rangers as a law enforcement organization.  For several decades, the force had not kept up with the growth of crime in the Lone Star State.  There were a few bright spots, however, such as former Texas Ranger Frank Hamer’s 1934 stakeout and ambush of outlaws Bonnie and Clyde.  Although it had the effect of boosting the image of the Rangers that had deteriorated under earlier governors, the crime problems in the state still existed.

James “Pa” Ferguson had been elected governor in late 1914.  His administration was marked by an increase in the property tax rate, the passage of a law favoring tenant farmers and limiting rent due land owners (later declared unconstitutional) and the expansion of the state prison system, among other things.  His reelection in 1916 was by a fairly strong majority.  Almost immediately, Ferguson made demands that the University of Texas Board of Regents remove certain faculty members who he felt had opposed his candidacy.  The Regents refused and Ferguson vetoed much of the state funding for the university.  An earlier move to impeach him was revived.  Around the same time, he was indicted by the Travis County grand jury for nine charges, including embezzlement and misapplication of public funds.  The House and Senate considered impeachment charges and the Court of Impeachment voted in favor of it by a margin of 21-3.  Ferguson technically resigned the day before the state legislature was to vote on his impeachment.

William P. Hobby served the remainder of Ferguson’s unexpired term.  Pat Morris Neff followed Hobby and served from 1921 to 1925.  The first female Texas governor, Miriam A. “Ma” Ferguson (wife of James Ferguson) succeeded Neff and served from 1925-1927 until she was in turn followed by Dan Moody and then Ross Sterling who served from 1927-1931 and 1931-1933, respectively.  “Ma” Ferguson was then elected to a second term from 1933-1935.  Some viewed her elections as being essentially proxy terms for her husband James, despite the fact that Mrs. Ferguson had a strong personality of her own.

The “Ma” Ferguson administration was somewhat paradoxical.  The Ferguson family was publicly opposed to prohibition law and yet they were personally known to be nondrinkers.  They opposed the Ku Klux Klan and its lawlessness and yet “Ma” Ferguson had pardoned thousands of convicted criminals, although a considerable portion of those pardoned had been convicted of prohibition violations.  “Ma” Ferguson had defeated Felix D. Robinson, reportedly a Klan candidate, back in 1924.  Accordingly, Miriam Ferguson’s election was viewed as a defeat of the Klan.  The Klan, however, pushed back with a declaration of its strength and resolve in a statement published in a Dallas newspaper, although its membership continued to decline over the next two decades.

There were rumors of corruption in certain areas of the second “Ma” Ferguson administration, including the above-mentioned granting of pardons and paroles.  James Ferguson, the former governor, allegedly solicited ads to the family owned publication, the Ferguson Forum, from entities desiring to do business with the state.  There were rumors pertaining to the awarding of a state textbook contract to a family friend.  Also, the Fergusons’ partiality in the awarding of state highway contracts by the Texas Highway Commission was called into question.  To the best of our knowledge, none of the above allegations brought forth any legal action.   In line with the topic today, Governor Ferguson is also said to have made political appointments to replace certain Texas Rangers in retaliation for her perceived lack of support for her campaign.  A large number of them had either quit or been fired following her election.

An independent report to the legislature from an outside consulting firm had recommended revamping law enforcement in Texas.  In his post-Depression era campaign for governor, candidate James V. Allred, a former attorney general, had run on a platform that included a promise to reorganize Texas law enforcement agencies, creating a state police force. 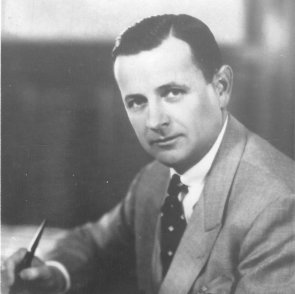 Born March 29, 1899 in Bowie, Texas, Allred was elected governor and began serving in January, 1935.  At age 36, Allred was the second youngest person to be elected governor, the first being Dan Moody, elected at Age 33.  He immediately voided the commissions of the “Ferguson” Rangers and set about replacing much of the force.  Only 11 of the the first 36 new hires had served as Rangers before.  In line with the recommendations of the consulting firm, the Rangers force (formerly under the Adjutant General’s department) was brought under the umbrella of the new Department of Public Safety in 1935, along with the Highway Patrol (transferred from the Highway Department), the Bureau of Intelligence and several other entities.  The bill gave the Texas Rangers full police authority.

Early on, Allred and the law enforcement agencies focused on illegal alcohol production and gambling, oilfield boom town violence and Klan violence.  Well known for this campaign, Allred served two terms as Governor from 1935-1939 before being appointed as a federal judge.  He later ran unsuccessfully for the U. S. Senate against W. Lee O’Daniel.

For the remainder of his life after having served as governor, Allred practiced law until 1949 when he was once again to a federal judgeship, a position he held until his death in Laredo due to complications of a seizure on September 24, 1959.  Allred is interred in Riverside Cemetery in Wichita Falls, Wichita County, where he had practiced law earlier in his career.

The Texas Rangers can always trace their unofficial origin back to the creation of a force in 1823 by Stephen F. Austin.  However, many view the post-Ferguson days under the Department of Public Safety and during the two terms of Governor James V. Allred as the beginning of the modern law enforcement organization that we know as the Texas Rangers.

Posted by Texoso on June 28, 2017 in governor, texas rangers

3 responses to “Governor James V. Allred and the Texas Rangers”