John Henry “Doc” Holliday was born August 14, 1851 in Griffin, Georgia to Henry Burroughs and Alice Jane McKey Holliday.  He was an educated man, having first studied at Valdosta Institute, Valdosta, Georgia.  He learned to shoot and play cards when he was still a youth.  It is generally thought that he lived in the southeastern United States, fairly close to home, until his 20s.

Doc had graduated from dental school in Pennsylvania when he was about twenty years old and practiced for a while in Baltimore, Maryland and later in Atlanta, Georgia.  It is thought that he contracted tuberculosis either while living in Baltimore or Atlanta and was advised to relocate to a drier climate for his health.  He had an uncle, Jonathan L. McKey, living in Washington County, Texas but the best information we can find indicates that once he decided to move, he came fairly directly to settle in Dallas.

A family acquaintance already living in Dallas was a dentist named John A. Seegar, also originally from Georgia.  Dr. Seegar was about twenty years older than Holliday.  He and his wife Martha had one son and at least four daughters.  He and Doc formed a partnership in 1872 that lasted a year or two.  Their office was above the Dallas County Bank at the corner of Main and Lamar streets, which today would be the intersection where El Centro College sits on the west side of the street, if you consider Lamar to run nearly north and south.  No explanation is found for the dissolution of the partnership, so it is unknown whether it was due to Doc’s health, his lifestyle or yet some other reason.  Doc was known to be a gambler and on New Year’s Day of 1875, he got into a gun fight with someone named Austin, thought to be a barkeep at a downtown Dallas saloon.  An article from 1959 in the Odessa American would quip that it was in Dallas where “the dentist had drilled his first victim.”  Apparently, neither man was badly wounded in the altercation and there were no arrests, but after this event, Doc apparently left Dallas, living in Denison, Texas for a short time.  Other Texas locations that Doc is associated with, however briefly, include Fort Griffin in West Texas.

Dr. Seegar continued to practice dentistry at several addresses, usually from about the 500 block to the 900 block Elm Street, in downtown Dallas, per the Dallas City Directory a few years either side of the year 1880.  The block numbers have since been changed.  Seegar died in 1891 at the age of 60 and is buried in Greenwood Cemetery, located in the area now referred to as Uptown Dallas and bordered by Hall, Woodside, Clyde and Oak Grove streets.

Eventually, Doc eventually made his way Dodge City where he is thought to have only briefly opened up a dental office but became acquainted with Wyatt Earp, who was serving as sheriff at the time.  It was also in Dodge City where Holliday became acquainted with his future (common law) wife, Mary Katherine Horony, of Hungarian descent, who had acquired the curious nickname of “Big Nose Kate.”  Kate is generally thought to have been a prostitute by profession, although Doc and Kate apparently stayed together as a couple for a number of years.

Wyatt Earp, his brothers Virgil Morgan and Holliday were all living in the Tombstone, Arizona area by 1881 where the legendary gunfight at the O.K. Corral took place on October 26 of that year.  Although it only involved a few individuals, the picturesque location and name made it stand out among stories and legends of the West.  The protagonists of this event were lawmen, Virgil, Wyatt and Morgan Earp, Doc Holliday and Johnny Behan.  The antagonists were outlaw/cowboys Ike and Billy Clanton, Tom and Bill McLaury and Billy Claiborne.  Although there were other injured individuals, only the McLaury brothers and Billy Claiborne died in the gun battle. 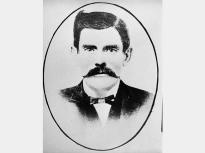 After the O. K. Corral incident, Doc’s health continued to decline.  He has been unofficially diagnosed as suffering from pulmonary tuberculosis, which back in the day might have generally been referred to as consumption.  Although today, tuberculosis is treatable, it is still considered a deadly infectious disease.  Symptoms include chronic pain, fever, coughing, fatigue, sleeplessness and lung damage.  Tuberculosis sufferers of the day would often take opoids and also might self medicate by other means including the use of alcohol.  Doc was no exception.

In his last days, he eventually made his way to Glenwood Springs, Colorado where he died November 8, 1887.  Kate was not with him when he died, apparently, although she had visited him near the time of his death.  Some accounts have him residing at a hospital or convalescent home, but it is generally thought that he died in his room at the Glenwood Springs Hotel.  The hotel was located at 732 Grand Avenue in Glenwood Springs.  However, the original structure was destroyed in a fire in 1945.  Doc Holliday is interred in a small cemetery overlooking the town.

One thought on “Doc Holliday”