The Longhorn has come to be one of the best loved symbols of Texas.  How they came to be here is an interesting story of its own to be dealt with later, but by the 1830s they were fairly plentiful and they ranged widely in Texas. 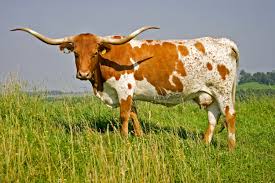 Following the Civil War, they were looked upon as a resource and potential source of income for the settlers.  They were found to be hardy and to reproduce rather easily.  We have seen peak Longhorn population estimates of three million to as many as perhaps five to six million animals in Texas.  Native American tribes are believed to have favored bison over the Longhorn because of the many uses of the bison in their every day lives.  Accordingly, for many years the wild Longhorn was allowed to thrive and was not widely hunted.  In Texas, settlers began rounding the cattle up and driving them to markets east and north of the area, depleting their number.  Estimates of the total number of Longhorns driven to market are as many as ten million animals.  In addition, as the open ranges were fenced and cattle ranches began to develop, other breeds were introduced that were believed to be superior to the Longhorn as a beef producing animal, edging out the Longhorn.

Though there were isolated herds of them, by the early 1900s, the once plentiful Longhorn was believed to be close to being wiped out completely.  Three names are usually associated with recognizing their near extinction and engaging in early Texas conservation efforts for the breed: author J. Frank Dobie, financier Sid Richardson and rancher Graves Peeler.

Peeler was born in Bexar County in 1886 and grew up on the family’s ranch, although his father was murdered by rustlers when Graves was only eleven.  He was educated in Pleasanton, graduated from West Texas Military Academy (now known as Texas Military Institute, or TMI) and studied at Texas A&M.  Among his other jobs, he was a brand inspector for Texas and Southwestern Cattle Raiser’s Association for about ten years before he returned to ranching.  He became acquainted with Richardson and Dobie and was asked to join them in locating Longhorn individuals and was able to acquire about three dozen animals that became the basis for small herds that were placed in three locations, one of which was his own ranch.

Richardson was born in Athens, Texas in 1891 and by the 1930s, had experienced financial success and failure numerous times although he finally accumulated a considerable fortune in the oil business.  Richardson had a strong interest in ranching as well.  He is well known for his philantropy and that of the Sid Richardson Foundation for grants to various colleges, libraries and charities in Texas and elsewhere.

Author J. Frank Dobie is noted for his interest in the Longhorn breed and enlisted the help of his friend Sid Richardson and rancher Graves Peeler to assemble a herd of the survivors.  In 1941, the herd was donated to the Texas Parks Board and was transported to Lake Corpus Christi State Park.  More individuals were located and the second herd was transported to Lake Brownwood State Park.  Since 1948, they have been primarily located at Fort Griffin at the Texas Historical Commission’s Fort Griffin State Historic Site.  Other members of the herd are cared for at Palo Duro Canyon, Lyndon B. Johnson, San Angelo and Copper Breaks state parks.  Care and management of the herd is now jointly shared by Texas State Parks and the Texas Historical Commission.