The old cowboy camp meetings were started by a Presbyterian minister by the name of William Benjamin Bloys.  Bloys was born in 1847 in Tennessee.  Around  the time of the  Civil War, his Unionist family moved  to Illinois.  Bloys was educated there in Salem Academy, after which he graduated in 1879 from Lane Theological Seminary for the purpose of becoming a Presbyterian minister.  He was married the same year to Catherine Yeck.

Rev. Bloys wanted to be a foreign missionary, but an unfortunate lung ailment caused him to be disqualified for overseas service.  The Presbyterian Church assigned him to Texas, where the more arid climate was expected to agree with him.

After Bloys came to the Big Bend area, some of the local folks including Exa Means, the widow of rancher John Means, and Bloys came up with the idea of having camp meetings for the ranching families and their cowhands in the summertime or fall.  The first such meeting was held in 1890 and ranch families from Fort Davis gathered at Skillman Grove under a brush arbor.  It was an outgrowth of an annual bear hunt that had been held earlier by ranchers.  Skillman’s Grove was southwest of Fort Davis, off Highway 166.

In the early days, ranchers would bring their cooks and prepare meals for the participants in the old bear hunt.  They reportedly began to invite ministers to help keep the language clean and the behavior more “presentable.”  The last year of the hunt, the only bear that was taken was a huge grizzly, not native to the area.  The following year, the first Bloys camp meeting was held, lasting two days, and Bloys became known as the “Shepherd of the West Texas Hills.”  Bloy’s first pulpit was a coffee crate.

The organization was chartered as the Bloys Campmeeting Association.  Ranchers would take off for several days and bring their cowhands.  Meals would be prepared in a common kitchen area and furnished at no charge, though voluntary cash contributions were welcomed.  Participants would pitch their tents and sleep on bedrolls and camp cots.  In good weather, they might sleep under the stars.  There was a tradition that no business would be transacted at the meetings.  For some cowhands, this would be the only formal preaching they would hear during the year.

Rev. Bloys passed away in 1917 at Fort Davis, Texas, though the meetings continued.  He is interred at Hillcrest Cemetery in Fort Davis.  The old preacher had been involved in the event for twenty-seven years.  Another missionary, a Baptist by the name of Leander Randon Millican, had long desired to have a permanent encampment in the area.  Millican served as temporary chairman of the meetings for 1917-1919.  After the death of Rev. Bloys, the former Bloys camp meeting transitioned into the Paisano Baptist Encampment, although the denominations taking part in the meetings have been Presbyterian, Methodist, Baptist and Christian (Disciples of Christ).  The meetings also were moved to July.  Eventually more permanent structures were built including cabins and a tabernacle.

Millican had been a missionary to Texas for many years.  Born in Brazos County in 1853, he was about five years younger than Bloys.  He had been a deputy sheriff in Lampassas County and then became a “circuit riding” preacher, traveling to various congregations and locations on horseback in his early days.  Millican was also a cowboy at heart and reportedly “broke” a number of the broncs that he rode in his ministry.  His Texas ties and ancestry dated back to his grandfather Robert Hemphill Millican family of the Old 300.  Millican had been involved in the Bloys camp meetings from their start in 1890. 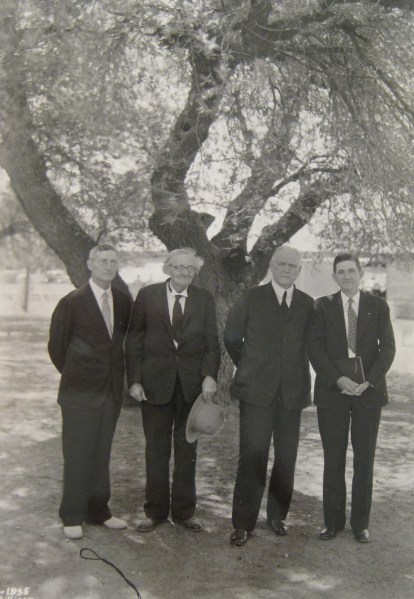 Pictured above are J. B. Tidwell, L. R. Millican, G. W. Truett and Roy C. Angell.  From other sources, the tree behind them appears to be the Symbolic Oak at Skillman’s Grove where Rev. Bloys is said to have preached his first sermon.

Dr. George W. Truett of Dallas had first been invited to preach back in 1902 during the Bloys camp meetings.  He began to speak at the area now known as the Paisano Encampment around 1916 at the invitation of rancher H. L. Kokernot.  That first year, Truett preached from the back of a wagon using an upright barrell as his pulpit.  He took a break during World War I, when Truett was one of about twenty pastors asked to travel to Europe to speak to the Allied troops.  After the war ended, Truett served as the main cowboy preacher from 1921 until 1942 with only a year or two break.

The Paisano Encampment seems to have come to fruition in 1921 when it acquired 1,400 acres in the Paisano Pass of the Davis Mountains.  Attendees included the ranchers and cowhands along with women and children.  Ranchers would provide the beef.  Dessert was often “Paisano Pie,” which was a piece of light bread soaked in syrup.

Millican died in 1938 after a short illness.  He had been directly involved with the cowboy camp at either location for nearly fifty years.  He is interred at Paisano along with his wife, the former Georgia Katherine Saunders.  The Paisano Encampment still continues today.  It is located about halfway between Marfa and Alpine on Highway 90.

Sources for the above include Paisano, Story of a Cowboy and a Camp Meeting by Mrs. Katie Stokes.  The book is long out of print but still may occasionally be found where used books are sold.