Fort Davis was one of the group of Texas frontier forts.  Also located on the short-lived Overland Trail, it provided protection for the travelers and settlers as well as the U. S. Mail in this contested area.  It was situated roughly equidistant between Fort Clark to the southeast and Fort Bliss to the northwest in what is now known as the Davis Mountains.  We would think of it today as being the northern point of a triangle with the points of the southern base being Marfa to the west and Alpine to the east.

The search for a suitable site began around 1854.  Six companies of men left San Antonio under the command of Lt. Col. Washington Seawell.  The site first selected was Limpia Canyon, now some ten to fifteen miles north of the present town of Fort Davis.  Though the site was likely chosen at least partly in hopes that it might provide shelter from winter storms, it was surrounded on three sides by sheer cliffs, which Seawell believed might be difficult to defend if the fort were to come under attack by Native tribes.  Seawell was overruled and subsequently some log structures were built.  The fort was named for Jefferson Davis, who was at that time serving as Secretary of War of the United States from 1853 to 1857 under President Franklin Pierce, who was described as a staunch abolitionist.  Seawell was called away for other duty and the acting commander constructed more structures of local stone.

For the next several years, the fort was used in defense of attacks from Apache forces in the area and also to launch military engagements against them.  The Camel Corps experiment also included Fort Davis in 1857, as the Corps passed through on at least two occasions in connection with other assignments.

The fort was abandoned by Union forces and occupied by Confederate forces in the spring and summer of 1861, respectively.  Confederate troops under the command of Lt. Col. John R. Baylor occupied the post for several months before moving west to southern New Mexico to begin the Confederate offensive, leaving only a skeleton force behind.  With the absense of Union and Confederate troops, the area once again began to experience attacks from Native tribes, primarily the Apache.  The next troops of any consequence to arrive were the federal California volunteers pursuing the Confederate troops heading east and vacating the Trans-Pecos region after their 1862 defeat at Glorieta Pass in northern New Mexico.  The 1st California Volunteer Cavalry engaged the Apache that summer.  After 1862, the fort was again abandoned and fell into decline until after the end of the Civil War. 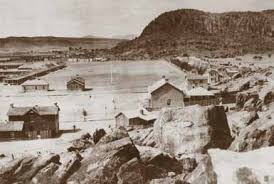 In 1867, United States Army troops led by Lt. Col. Wesley Merritt reestablished the post closer to the current town of Fort Davis and outside the vulnerable Limpia Canyon, roughly where Lt. Col. Seawell had originally desired to locate it.  Merritt remained in command until the arrival of Col. Edward Hatch who remained there for some time until being posted to New Mexico.  Hatch was succeeded by Lt. Col. William Shafter, nicknamed “Pecos Bill” after his successes in West Texas against the Native tribes.  Shafter was noted for being aggressive and having success in his tactics against the Native forces.  As a result, the Big Bend and West Texas regions remained relatively peaceful until the mid to late 1870s.  It was during this period that more construction was added, permanent and semipermanent structures of limestone and adobe.

The fort was one of the locations in Texas, New Mexico and Arizona to be staffed by the so-called Buffalo Soldiers, in this case, the 9th and 10th Cavalry and the 24th and 25th Infantry.  These soldiers proved to be quite successful in defending the area and distinguished themselves as capable and effective troops in service to the United States Army.  Buffalo Soldiers were posted in the area for a total of about eighteen years.

One of the last great chiefs of the Warm Springs Apaches, Victorio, rose to prominence about that time as a force in the area to the west of Fort Davis, leading the United States Army under Brig. Gen. O. C. Ord to reorganize the Pecos District and mount offensives in response.  Victorio, leading Warm Springs and Mescalero Apaches, was known to attack and then escape into Mexico.  The United States secured the cooperation of the Mexican government to work with them to pursue him.  Led by Col. Benjamin Grierson out of Fort Concho, the United States Army and Mexican forces eventually weakened Victorio’s forces.  After many years of succeess, Victorio was finally defeated in late 1880 in an action by Mexican troops.  Some accounts say he was killed by a Mexican sharpshooter, while others say he committed suicide rather than be killed or captured.

In the early 1880s, Col. Grierson commanded the fort for around three years.  During the next several years, the fort was improved.  The final order for abandonment was given in the summer of 1891 and the remaining troops left the area.  After he retired, Brig. Gen. Grierson bought property nearby and lived there for a number of years.

Today, about two dozen of the permanent structures remain and have been either restored or rebuilt.  Fort Davis is presently operated by the National Park Service as a National Historic Site.  A link to the NPS fort site is here.  Blessed with generally favorable area weather, the park is open most of the year except for some national holidays.  Park Service fees apply.

Posted by Texoso on December 13, 2018 in civil war, forts, tribes and tribal leaders