Nathan/Nathaniel “Nat” Love was born into slavery but became a well known cowboy, even publishing a book on his life experiences, “The Life and Adventures of Nat Love, Better Known in the Cattle Country as ‘Deadwood Dick’.”  The book can be purchased or downloaded free from various sources.

His name was supposedly pronounced “Nate,” as in Nathan.  Love was born to Sampson and Mahala Love in Davidson County, Tennessee in June of 1854, a few years before the Civil War, making him just about six years old when the war began.  Nat’s father was formerly a slave foreman and his mother was formerly a cook for the family of Robert Love, from which they took their last name.  After the war, Nat’s father briefly worked as a farmer before he died.  Nat then worked his way west, as he learned his skills as a cowboy, including breaking horses.

Nat walked and hitched rides to Dodge City, Kansas where he linked up with a Texas outfit that already had a number of “colored cow boys” as he refers to them in his book.  Nat told of being offered a job if he could break a horse named Good Eye.  Surprising the other cowboys, Nat rode Good Eye, calling it the worst horse he rode in his life. As a result, he won an early paying job on a ranch known as the Duval Ranch in the Panhandle on the Palo Duro River, as opposed to the likely better known Duval Ranch in south Texas, earning one dollar a week. His first nickname was “Red River Dick” and was given to him by the other cowhands.

When interviewed, Love would later say that he always wanted to accomplish something and at age sixteen found himself living on a ranch in the Texas Panhandle working cattle.  He did not have formal schooling, but one account told of his being taught to read and write by his fellow cowboys.  They had bought him a book after another cattle drive to Dodge City.  It took him three months, he said, but he learned quickly and could read and write as well as any of the other cowboys.

He kept with it and acquired the skills necessary to become a trail boss, cattle brand reader and trail breaker.  He told of his first Indian attack. They were the first Indians he had ever seen. He had bought a Colt 45 on one of the trail rides, but had not fired it prior to the attack. He also learned the Spanish language from working on trail drives out of Mexico. After about three years in the Texas Panhandle, Love eventually settled in Arizona in the early 1870s working on the Gallinger Ranch on the Gila River.  By the time he wrote his memoirs, he wore the marks of a hard life on the trail, including a scar on his nose from an Indian fight.  He told of being captured by Indians, running the risk of being killed and of being saved by the kindness of a Chief and the Chief’s daughter.

Nat told of earning the nickname of “Deadwood Dick” after a trail drive to Deadwood, South Dakota.  He reportedly won a competition of cowboy skills including riding, roping and shooting with a pistol and rifle. 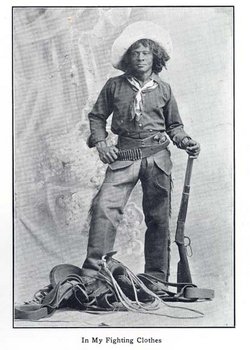 Love rode the trails until 1889, after which he began a second career as a railroad porter, which took him all over the country.  He wrote his memoirs after retiring from the railroad company.  His book was published around 1906 of 1907 and contained accounts of his exploits.  It was a popular genre for the day, as readers were interested in tales of the old west.

Roughly one hundred years later, a Milwaukee former hair stylist named Gerald D. Coleman created a monologue where he acted out the life of Love.  One of his goals, he said, was to promote the truth of the role of Black cowboys during that era.  After learning about the life of Nat Love, he felt that the story of Black cowboys and the role they played was not well told, a statement with which we concur.  Coleman’s desire was to tell the story as Nat Love would have told it and was quoted in a newspaper interview as saying “I try to portray Nat Love as part-legend, part-man.  I wrote the show with the idea of showing the Black feeling and Black contribution” in a way that would be entertaining and educational.

Nat Love married the former Alice Arnold in 1880 and the couple had at least one daughter.  He died in Santa Monica, California in 1921 at the age of sixty-seven and is buried with Alice in Woodlawn Cemetery there.