Buck Owens was born Alvis Edgar Owens, Jr. to Alvis Edgar and Macie Owens in Sherman, Texas in 1929.  He is said to have given himself the nickname of Buck after his favorite mule (alternately said to be a donkey or a horse in different accounts) when he was young.  His father, Alvis Edgar, Sr., was a sharecropping farmer in Grayson County, Texas.  In 1937, the family moved west to Arizona.  The family legend is that their trailer broke down near Phoenix, Arizona where they had other relatives, so they elected to settle there.  Similar to the stories of many other musical artists, Buck’s mother sang and played the piano at their home and in church.  Buck learned to play the guitar, mandolin and other instruments when he was a youth.  He dropped out of school at age thirteen to help the family survive and did all sorts of jobs to raise money.  As a young man, Buck began performing in honky-tonks to earn his living.  When he was about twenty, he married his first wife, the former Bonnie Campbell, a singer in a band both she and Buck played in called Mac and the Skillet Lickers.  Buck and Bonnie eventually moved to Bakersfield, California where Buck began to play around town and in the surrounding area. Buck and Bonnie would remain married for about five years.  He was married three more times.

By the 1950s, Owens had broken into the recording business as a session guitarist and signed a contract with Capitol Records in 1957.  He recorded behind a number of popular artists.  This began a long recording career for Buck and the band they named the Buckaroos.  The Buckaroos were led by guitarist and fiddler Don Rich who also did vocals.  The Buckaroos released albums under its own name, though their biggest success was with Buck Owens and the Buckaroos.  Other artists who passed through the band over the years included future country music star Merle Haggard.  Once they began to collaborate, Buck and Rich performed together continuously until Rich’s untimely death in a motorcycle accident in 1974.  This profoundly affected Buck, since they were such good friends and collaborators, but Buck continued to perform.

Owens had numerous charted hits, including “I’ve Got a Tiger by the Tail,” Crying time,” “Together Again,” “My Heart Skips a Beat,” “Love’s Gonna Live Here” and “Act Naturally.” Many of his songs are characterized by their humor and clever lyrics.  Buck is considered to have strongly influenced the development and popularity of the so-called Bakersfield Sound, a blend of honky-tonk, electric instruments and rock and roll sound.  Buck Owens’ songs were covered by many other artists over the years, including Ray Charles, Johnny Rivers and the Beatles.

Buck was once quoted in a newspaper interview about how he wrote his songs.  He said, “When I just sit down and say I’m going to write a song, I don’t end up with anything.  I have to hear something, or have some incident come to mind, or wake up at 3:00 in the morning with an idea, go over to the piano or pick up the guitar.  I never write it down; I just formulate it, and then if I can remember the words or the melody at least two or three days later, I figure it’s a pretty good song.” 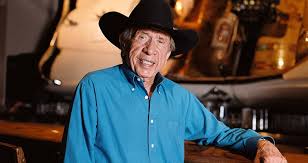 Buck was co-host and a founding member of the cast of the long running comedy-variety series “Hee Haw” that ran from 1969 to 1993 and also was featured in a syndicated show called the “Buck Owens Ranch Show.”  Buck left the cast of “Hee Haw” in 1886.  During his career he was a successful investor in radio stations and formed his own booking agency, record producing company and publishing company.  Owens was considered to be a very good businessman in these areas and also had retained the rights to his own recordings.  Except for a couple of minor breaks for various reasons, he performed in some capacity right up until he died.

His many honors include being inducted into the Country Music Hall of Fame in 1996, being awarded a star on the Hollywood Walk of Fame and being inducted into the Nashville Songwriters Hall of Fame.  Buck suffered from throat cancer in the 1990s and lost part of his tongue to complications of the disease.  Owens died in 2006 from an apparent heart attack after having performed at his Crystal Palace Club the night before. He is interred at the Greenlawn Southwest Cemetery in Bakersfield.