As we approach Memorial Day, we honor Presley Land of Alvord, Texas.  United States Army Sergeant Presley Bazelle Land was killed on the island of Okinawa on June 17, 1945.  He was the oldest son of Jessie Clarence and Sarah Isabelle Magers Land and was born in Alvord, Wise County, Texas on October 22, 1916.  Jessie was a farmer and Isabelle was a housewife.  Presley graduated from Alvord High School around 1933 and married the former Vera Katherine Richards on September 4, 1937.  Presley had attended college for one year and was working as a clerk in Fort Worth for Convair, an aircraft manufacturer, at the time he enlisted in the service on May 24, 1943.

The family learned that Sgt. Land was killed by so-called “friendly fire” on June 17, 1945 as he searched the island for Japanese prisoners.  The island of Okinawa, situated roughly 341 miles from the coast of Japan, was the location of one of the last battles of World War II.  It had begun on April 1, 1945 and was officially ended five days after Sgt. Land’s death on June 22, 1945.  The capture of Okinawa allowed the United States forces to use Kadena Air Base to support the proposed invasion of Japan.  The island had been well defended and was only taken by United States Marine and Army forces after what has been called the largest amphibious assault of the Pacific War.  There were a considerable number of casualties on both sides of the conflict, with United States casualties being estimated at 75,000 and Japanese casualties estimated from 85,000 to 117,000.  In addition, an estimated 149,000 of Okinawa residents were either killed, committed suicide or reported missing around this time.  This amounted to roughly half of the civilian population of the island prior to the war. 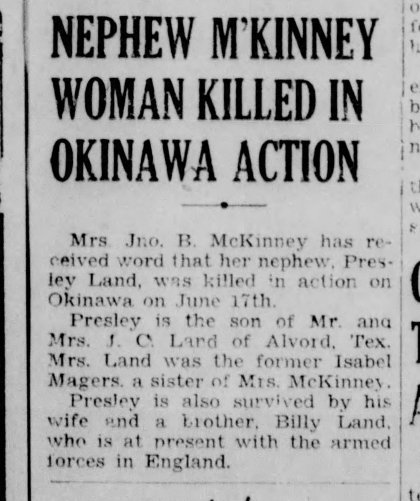 –Special thanks to Jeannie Magers Wesley