William Clarke Quantrill was known as a leader of a pro Confederate band of guerrillas during the Civil War.  He was born in Ohio in 1837.  By the age of sixteen, he had become employed as a school teacher in Ohio.  He was from a large family the father of which was reportedly abusive, but who died when Quantrill was still a young adult.  Quantrill left home when he was still under twenty and moved to Illinois where he was working in a rail yard.  He was involved in an altercation in which a man was killed, with Quantrill claiming self defense, but Quantrill was not charged with the killing due to a lack of evidence.  During the rest of the 1850s, Quantrill drifted between jobs and locations winding up in the state of Kansas by the end of the decade.  One of his jobs was to capture runaway slaves for bounties, which he was likely doing at the outset of the Civil War.  He formed a pro Confederate band of raiders having learned guerrilla tactics in other outfits.  His band included Frank and Jesse James, brothers Jim, Bob and Cole Younger, Archie Clement, William T. “Bloody Bill” Anderson and other individuals.

END_OF_DOCUMENT_TOKEN_TO_BE_REPLACED

Benajah Harvey Carroll was born in Mississippi to Benajah and Mary Eliza Mallard Carroll in 1843.  The family was of Irish descent with B. H.’s great grandfather having been born in Ireland.  The Carrolls moved first to Arkansas before settling in Burleson County, Texas near Caldwell in the late 1850s.  He was known in his family as a reader and his brother Dr. J. M. Carroll recalled that on the trip to Texas, Benajah would ride a mule while reading a book.  He often would get ahead of the wagons and come to a place to stop for the night.  When his family arrived, Carroll would have built a large fire and would be sitting beside it, reading.

END_OF_DOCUMENT_TOKEN_TO_BE_REPLACED 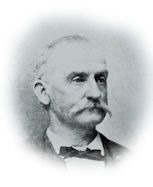 John Camden West, Jr. was a lawyer, a judge, an educator and an author in Waco, Texas. He was born on April 12, 1834 in Camden, South Carolina from which he and his father got their names.  He was 20 years old when he graduated from the University of South Carolina. He had a brother, Charles S. West, who by that time was already practicing law in Austin, Texas, and John joined him there in 1855.

END_OF_DOCUMENT_TOKEN_TO_BE_REPLACED

In Houston, Texas on the I-45 access road and North Main outside Historic Hollywood Cemetery is a roadside marker dedicated to Mollie Arline Kirkland Bailey who has to be one of the most colorful Texas women who ever lived.

END_OF_DOCUMENT_TOKEN_TO_BE_REPLACED

Governor Coke, 15th Governor of Texas, serving from January 15, 1874 to December 21, 1876.  Coke was the husband of Mary Evans Horne of the pioneer McLennan County Horne family in 1852 and was the brother-in-law of Ophelia Jenkins Horne and her husband Lucius Louis Horne. Coke was born in Virginia and after graduating from William and Mary, he moved to Waco, Texas in 1850 to practice law.