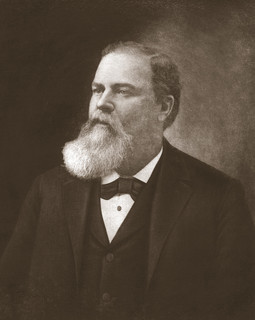 Christopher Columbus Slaughter was born February 9, 1837 to George Webb and Sarah Mason Slaughter.  His father George Webb Slaughter had served with Sam Houston during the Texas Revolution and his grandfather William Slaughter had served under Andrew Jackson in the War of 1812.  They followed his great grandfather, who had served in the American Revolution back in North Carolina.  It was only natural that C. C. was drawn to serve in response to the call for volunteers to defend the frontier of Texas when he came of age.

His grandfather had settled in what is now far east Texas near Nacogdoches around 1830 after living for a number of years across the border in Sabine Parish, Louisiana.  There he began raising cotton and cattle.  It was not a stable environment with settlers being intimidated by the Mexican Army who were threatening to align themselves with the local Cherokee tribe to force the settlers out.  As early as 1832, there was fighting in Nacogdoches itself, but the new settlers were able to drive off the Mexican Army and temporarily end the oppression.  However, the stage was set for the spreading conflict between the settlers and Mexico, leading up to the Texas Revolution.  When the revolution began in 1835, George Slaughter joined Stephen F. Austin’s army of volunteers near San Antonio.  He served as a courier and chief of scouts under Sam Houston  Soon after the Battle of San Jacinto in 1836, George married Sarah Mason and named their first child Christopher Columbus Slaughter.

The successful revolution led to an influx of even more settlers, leading to increasing conflicts with the Cherokee and other local tribes in the years that followed.  George joined with other volunteers in the summer of 1839 to invade Cherokee lands roughly in the area that is now known as Cherokee County, Texas.  Following the temporary end of the Cherokee conflict, George moved his family back to Louisiana for a while.  In addition to farming with his father in Sabine Parish, George studied for the Baptist ministry and expanded the family business into raising beef cattle to serve the growing market.

Around 1849, George, his brother William and young C. C. (called “Lum” in those days) drove a herd of about 100 cattle about 200 miles into what is now Freestone County in Texas, near the Trinity River.  George became attracted to the area because of its fertile land and the availability of water, so he moved his family there.  C. C. and his three brothers worked on the family land and C. C. also hired out as a drover to assist other ranchers in navigating their herds across the river.  As settlements increased in Freestone County, the family was attracted to the land in the Brazos River valley and began to look for available land there.  In the mid 1850s there was a relative time of peace between the Plains Indians and the settlers, assisted greatly due to the presence of federal forts in the Brazos River area, including Fort Graham, Fort Worth and Fort Belknap.  in 1856, George and his family settled in Palo Pinto County on a 2,900 acre ranch that would be his home for many years.  The family home was located about 30 miles from Fort Belknap.

In 1857, the U.S. government removed the Second Cavalry from Texas to Utah, leaving the frontier more vulnerable than it had been before.  The Nokoni Comanches began raiding to the south of their territory.  State and federal troops retaliated, leading to even more Indian raids.  Peaceful tribes like the Caddos were caught in the crossfire, including one incident in which some of the Caddos who had been encouraged to hunt nearby were attacked and killed by whites only a mile from the Slaughter Ranch.  Hearing the gunfire, C. C. hurried to the scene to find the carnage and then rode out alone to the Caddo settlement to try and defuse the situation.  He was successful at the time, but the murderers were never brought to justice.

C. C. volunteered for the frontier defense due to this increase in the hostilities with the local tribes and in December of 1860.  He was a part of a group led by young Sul Ross and including other ranchers such as Charles Goodnight that came across the Comanche settlement which included Cynthia Parker and was thought also thought to include Chief Nocona.  Hand to hand combat ensued, resulting in the death of the Comanche leader thought to be Nocona, though his son Quanah would maintain that it was another warrior.  The rest of the Cynthia Parker story is fairly well known.  Slaughter continued to serve with the Texas Rangers after the Civil War broke out, riding under Capt. William Riley Peveler in the pre-reconstruction Frontier Regiment where he would remain until the end of the Civil War.

Some accounts have C. C. serving as a colonel with Terry’s Texas Rangers in the Confederate Army,  but at this point, we have not found any verification that he left the state.  Instead, he appears to have remained in Texas in defense of the frontier and the state while serving with the Texas Rangers.  At this point, we believe that the title of colonel, as he was sometimes addressed, was an honorary one.

During the war, C. C. participated in numerous skirmishes and battles with local Comanches.  During this period, he married and began to raise a family, despite the hardships of life on the frontier.  In addition to the Indians, there was an increasing presence in the area from Civil War deserters and Jayhawkers, though the latter two groups may have unexpectedly made the area less stable for the Indians than for the Anglo settlers.

After the war, money was scarce and though cattle were plentiful, the market was depressed.  The local ranchers around Fort Belknap continued to suffer from Indian attacks, so several of them arranged to travel south towards Mexico for safer places to raise their beef.  The group included Charles Goodnight, Slaughter and at least a half dozen others.  When they had almost reached reached Mexico near the Devil’s River area, the rifle of George Lemley accidentally discharged and the round struck Slaughter in the shoulder.  He was initially not expected to survive, but his fellow ranchers treated him and holed up there at the Devil’s River site for a few weeks until Slaughter could be transported to a nearby settlement and eventually returned home.  Slaughter was confined to his residence as he convalesced for a year.  During this period, his fortunes continued to decline.  He offered to sell his holdings for as little as $10,000 but had no takers, though in a few short years, they could have brought a price in the millions.

C. C. continued to persevere.  Around 1867, the family elected to drive their cattle to market.  Ordinarily they would have engaged Oliver Loving to make the drive, but he had just been killed by Indians on a drive in September, so they had to make the drive themselves.  The original goal was to go east to Shreveport, but they found a cattle buyer in Jefferson, Texas and made a good sale.  They used some of the proceeds to purchase wagons and mercantile products and secreted the rest as they took the route back.  Once they arrived back in Palo Pinto, they began selling and trading the goods for more cattle and hid the remainder under a nearby rock as their “bank” feeling that it was safer than keeping it elsewhere.  The following years, they made cattle drives to Kansas, leaving some of their family there to manage parts of the unsold herds.  Indian raids continued until around 1870 until the arrival of federal troops reinforced the frontier forts.

Around 1873, C. C., J. R. Couts of Weatherford and William E. Hughes formed City Bank of Dallas, his first venture into formal banking.  His first wife Cynthia died in 1876, after which he married Carrie Averill of Kansas, the daughter of a Baptist minister.  Around this time, cattle in the area suffered from “tick fever” and “Texas fever” so he began to look to the open range of West Texas.  At various times, he partnered with John Scarborough and J. C. Loving, son of Oliver Loving.  He also traded his interest in City Bank for a herd of cattle and established a large holding out in the general area of Andrews, Borden and Howard counties, calling it the Long S Ranch.  He would eventually reinvest in the bank after it changed its name to City National Bank in Dallas.  His cattle business continued to be cyclical, enjoying periods of prosperity among devastating blizzards followed by years of drought.

In the decades before and after the Civil War, it seemed as though there would be no end to the difficulties and hostilities.  After only a few years of the Republic of Texas, there was a push for statehood that had been followed by succession and the Civil War.  The end of the war left North Texas in hard times but C. C. continued to be actively involved in the ranching business, trying various other ventures such as cattle drives to make money.  In the early 1870s C. C. was still engaged in cattle breeding and formed a partnership with his father called C. C. Slaughter and Company but his father was concentrating more on his preaching and he was increasingly leaving the business to be run by his sons.  George founded several Baptist congregations and rode between them on horseback to preach.  As was the custom in the day, he would preach from his Bible but would usually have his rifle and six shooter within reach as the area was far from being stable.  George Slaughter founded some 50 churches and baptized around 3,000 people during his ministry, until he finally retired in 1886.

Slaughter’s fortunes continued to rise and fall.  The beef industry also was affected by a consortium of meat packing companies that attempted to drive down cattle prices to unaffordable levels.  In the late 1870s, Slaughter helped form the Northwest Texas Cattle Raisers’ Association.  It and its successors attempted to counter the stranglehold that the packing companies held on beef prices.

He relocated his family to Dallas around 1873 but continued in the cattle breeding business in various locations well into his maturity and senior years.  He introduced the hardy Hereford cattle breed into his herds in the 1890s.  His banking interests continued to evolve, with one of the interests, American Exchange National, eventually becoming First National Bank in Dallas.  His cattle business efforts focused on developing his fine herds and acquiring and maintaining control over sufficient acreage on which to pasture them.  At its height, his holdings amounted to more than one million acres that were either owned or controlled.  All the while, the enterprise dealt with the capricious Texas weather and the cyclical beef market. Also, Texas law favored large land holdings, but it gradually changed in favor of farming interests.

While living in Dallas, Slaughter met George Washington Truett, the young pastor of First Baptist Church of Dallas in 1897 and the two developed a life long friendship.  Slaughter was known as a generous benefactor of Baptist causes, funding 2/3 of the $90,000 building cost for First Baptist Church of Dallas and much of the initial cost of Texas Baptist Memorial Sanatorium that eventually became the vast Baylor Medical Center in Dallas.  He continued to generously support the hospital system after it was created.  In addition, he was supportive of Texas Baptist schools.  He  served as vice president of the Southern Baptist Convention, as president of the state Mission Board, and as an executive board member of the Baptist General Convention of Texas.  Slaughter passed away in 1919 and his funeral was held at the family home at 3506 Worth Street.  He is interred at the historic Greenwood Cemetery in what is now known as Uptown in Dallas.