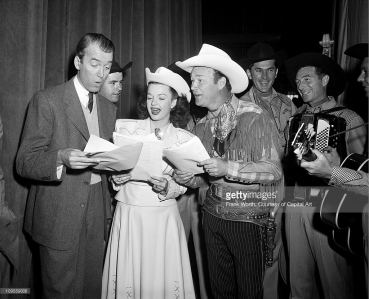 Dale Evans was born Lucile Smith (later changed to Frances Octavia Smith) on October 31, 1912 in Uvalde, Texas to Walter Hillman Smith and Bettie Sue Coln, according to published genealogy records.  The family later moved to Osceola, Arkansas where she attended high school.  When she was 14, she eloped and married Thomas Frederick Fox with whom she had her first born son, Tom Fox, Jr.  The marriage ended shortly thereafter and two years later, she married August W. Johns.  In 1936, she married Robert Dale Butts, which relationship lasted about nine years.  She had no children from the latter two marriages.  In her early years, she struggled as a single parent and supported herself by working as a secretary, a singer and working in radio in Chicago, Memphis, Dallas and Louisville.  She was given the stage name of Dale Evans by a radio station manager who suggested it because it was easier to pronounce than Frances Octavia Smith.

Dale came to the attention of 20th Century Fox while she was still married to Butts.  The studio liked her and cast her opposite actor Roy Rogers (birth name, Leonard Slye) in the film Home in Oklahoma.  Rogers had two previous marriages which produced two children, Linda and Roy, Jr.  The couple were married on New Year’s Eve in 1947 at the Davis, Oklahoma ranch where the above film was shot.  In contrast to both of their early relationships, their union was a success on screen and in reality, as they were married a total of 51 years when Roy died in 1998.

Home in Oklahoma was not Dale’s first film, by any means, as she had previously been cast as an actor in over twenty-five films and had performed as a singer in several others prior to Home in Oklahoma.  The couple went on to do around thirty-five films together.  They also appeared in numerous television shows including the Gene Autry Show, the long-running Roy Rogers Show, the Dinah Shore Chevy Show, the Roy Rogers and Dale Evans Show, an episode of the Andy Williams Show and numerous other guest appearances, such as The Muppet Show.

Roy was known as the “King of the Cowboys” and appeared in around 100 films, plus numerous television appearances.  Dale, the “Queen of the West,” had fewer film and television credits but she also became well known.  She appeared comfortable on screen and in personal appearances.

Dale wrote around twenty books and also gave many print and television interviews.  She gave credit to her strong Christian faith which she said brought the couple through personal tragedies such as the death of their only child together, two year old Robin who suffered from Down Syndrome and died in 1952 from complications of the mumps, the death of their adopted Korean daughter Debbie in a bus accident in 1964 during a mission trip to Mexico and the loss of their son Sandy who accidentally choked to death in 1965 while he was stationed in Germany.

They were vocal about their beliefs and supported many religious and humanitarian causes.  Despite Roy’s on-screen persona, his bravado in performing film stunts and the like, he admitted to being shy when talking about personal matters.  Roy quipped that he went to a one room schoolhouse that was an even 100 yards from the local Baptist church.  He said he knew it was 100 yards, because he and his pals had measured it and it was the perfect distance for a foot race.  The couple was not heavy handed or obnoxious about their beliefs, but rather appeared comfortable with them and spoke about their up and down life experiences in a normal, matter-of-fact way.

They made a successful team and in addition to their film and television careers, they recorded over four hundred songs.  Probably the most familiar song associated with them was “Happy Trails,” which Dale wrote in response to Robin’s death in 1952.  It became the couple’s signature song that played during the credits of their television show (link).  An earlier song by the same name was written by Foy Willing for a Republic Pictures film.  Dale’s version uses the first three notes of Willing’s version, but we are unaware of any intellectual property issues regarding the matter.  Dale’s version of Happy Trails has been recorded many times by other artists.  It has become an American standard even to listeners who are not aware of Roy Rogers and Dale Evans as singers or actors.

Posted by Texoso on July 20, 2017 in biography, entertainers, texas women