Jim Collins was the son of Carr P. and Elza Ruth Woodall Collins.  He was born on April 29, 1916 in Hallsville, Harrison County, Texas.  Jim was a third generation Texan.  His grandfather was born in Hardin County, Texas and his father was also born within the state.  His great grandfather had come to Texas in the mid 1850s, before the Civil War.  Carr P. Collins was a successful businessman in the insurance field and founded Fidelity Union Life Insurance Company.  Carr was active in the Democratic party and worked many years in party politics and organization and to the best of our knowledge, Carr did not run for a public office.  Jim grew up in Dallas and graduated from Woodrow Wilson High School, earned a bachelor’s degree from Southern Methodist University and master’s degrees from Northwestern University and Harvard Business School.

After graduation, Jim entered the United States Army as a Lieutenant in the Corps of Engineers in World War II, serving for one and a half years in Europe, including D Day, in France, Belgium and Germany.  He also served under Gen. George Patton in the Third Army and participated in the Battle of the Bulge.  He was promoted to captain during the war and was awarded four battle stars, the Medal of Metz, and the Purple Heart.  The Medal of Metz, or the Metz Liberation medal, is a French medal created by the Municipal Council of Metz on December 12, 1944 and awarded to French and Allied combatants as well as resistance force units who participated in the battles of September 1, 1944 through December 25, 1944.

After the war ended, he returned to Dallas and his job as an executive for Fidelity Union Life.  He was a successful businessman, credited for having taken Fidelity Union and built it into a major national company in the insurance field.  Collins was unsuccessful in his first campaign for Congress, losing in 1966 to Joe Pool.  He was a delegate to the 1968 Republican National Convention.  In 1968 he won a special election for the seat in the United States House of Representatives that had been vacated due to the death of Rep. Pool.  Collins went on to serve for the next fifteen years in Congress.  He was very active while he was serving in Congress, sponsoring over 150 bills and maintaining a high attendance record.  He was politically and fiscally conservative.  He was known as one who supported small business, being named Man of the Year by the National Association of Independent Small Businessmen and was voted “Watchdog of the Treasury” by the organization. 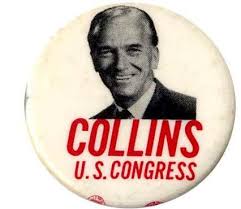 He had considered running for a state office such as governor, and in resigned his seat in Congress to oppose long time Democratic Senator Lloyd Bentsen in 1982.  Collins won the Republican primary election but only received about 40 percent of the vote in the general election in comparison to Bentsen’s almost 59 percent.  There was no shame in losing to Bentsen since along the way, Bentsen had earlier defeated such strong candidates as Ralph Yarborough and George H. W. Bush.  After this campaign, Collins retired from politics.

In our household, we referred to him as “Smiling Jim” meaning no disrespect, since he was usually photographed that way.  Though we only met him once, true to his public image, he was quite congenial and evidently very much at ease when dealing with the public.  Along with his brother and sister, Jim was active in local charities, including those supporting local schools and organizations that provided health care to needy individuals.  He was also a benefactor of the Dallas Museum of Art, the Salvation Army and his local church.  Collins passed away July 21, 1989 in Dallas at the age of 73, from complications of a pulmonary condition.  He is interred in Restland Memorial Park.