Fort Davis was one of the group of Texas frontier forts.  Also located on the short-lived Overland Trail, it provided protection for the travelers and settlers as well as the U. S. Mail in this contested area.  It was situated roughly equidistant between Fort Clark to the southeast and Fort Bliss to the northwest in what is now known as the Davis Mountains.  We would think of it today as being the northern point of a triangle with the points of the southern base being Marfa to the west and Alpine to the east.

END_OF_DOCUMENT_TOKEN_TO_BE_REPLACED

The military reservation that would become Fort Bliss was initially established on the Rio Grande in the late 1840s shortly after the end of the Mexican-American War and was active from 1848 to 1851.  At this time, it did not have an official name, and was referred to as the “Post Opposite El Paso del Norte.”  There was already a sizeable civilian settlement on either side of the Rio Grande: American El Paso and Cuidad Juarez on the Mexican side.  The fort was comprised of the Third Infantry and was commanded by Jefferson Van Horne.  After this short period of two to three years, its troops were mostly removed to Fort Fillmore, New Mexico Territory.

END_OF_DOCUMENT_TOKEN_TO_BE_REPLACED

Fort Phantom Hill was located southwest of Fort Griffin and northeast of Fort Chadbourne.  The orders to create such a fort were issued by General William Belknap as he was beginning construction at the fort that would later be named for him, although the General died before he could complete either outpost.  Construction began in 1851 under the leadership of Lt. Col. J. J. Abercrombie pursuant to the orders of General Persifor F. Smith, Belknap’s successor.  Belknap’s plan had been for the outpost to be located in Coleman County, but Smith changed the orders to the current location.  A few buildings were built of local stone, but others were built of wood or were even more temporary, such as pole huts.  In retrospect, it would have been difficult to find a worse location from a physical standpoint, as it was poorly situated near dry or brackish river branches.  Water had to be hauled several miles and there were no nearby wood sources for fires.  Wood for construction was at least forty miles away.

END_OF_DOCUMENT_TOKEN_TO_BE_REPLACED

The U. S. Army camp that would later become Fort Griffin was established in 1856 to help protect a Comanche reservation that had been set up earlier in the area.  When Robert E. Lee held the rank of Lt. Col. in the U. S. Army, he served here as commander from April, 1856 to July, 1857.  It was located less than a mile from the Clear Fork of the Brazos River on a small plateau of about sixty feet in height providing an enhanced view of the surrounding area.  The original location was in the lowlands a short distance away until a monsoon type rain hit and turned it into a swampy mess.

END_OF_DOCUMENT_TOKEN_TO_BE_REPLACED 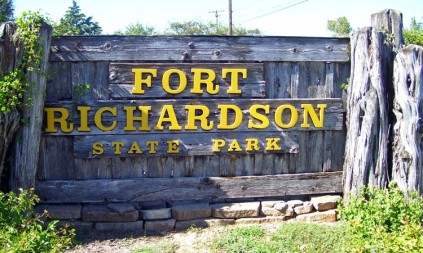 Fort Richardson was founded in 1866, following the end of the Civil War, first staffed near Jacksboro, Texas by elements of the 6th Cavalry.  It was temporarily relocated around 20 miles north to a location known as Buffalo Springs in Clay County one year later.  Buffalo Springs had the advantages of more plentiful water and timber, but was closer to the hostile tribes while also being further from supply depots in the Austin area.  Construction was begun at Buffalo Springs, but was abandoned in favor of the original Jack County location after an Indian attack and several months of drought.  The Jack County location was reestablished and consisted of about 300 acres along the Lost Creek tributary of the West Fork of the Trinity River.  Construction had to start over as the previously abandoned buildings in Jacksboro had been used for building materials by the local settlers.  Fort Richardson became the northern-most outpost in the chain of western forts.